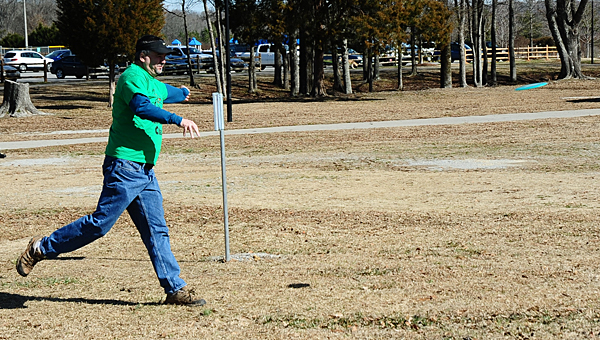 ALABASTER – For fans of one of the fastest-growing sports in the nation, the Jan. 31 ribbon cutting ceremony for Alabaster’s new disc golf course didn’t come fast enough.

Since the baskets were installed at the park, the 18-hole course has seen a steady stream of activity from those who couldn’t wait to experience the city’s new offering.

“I think this will be one of the most popular courses in the whole metro area,” said past disc golf world champion Tom Monroe, who helped to design the Alabaster course. “Disc golf has been the fastest-growing sport in America for the past 10 years.”

Over the past several months, the Alabaster Teen Council has worked with the Alabaster Sports and Entertainment Foundation to bring the project to fruition, said Alabaster Mayor Marty Handlon.

After accepting the Teen Council’s proposal, ASEF donated $5,000 to the $11,000 project, and the city government funded the remaining expense of the professionally designed course.

The Alabaster Parks and Recreation Department did much of the work on the 18-hole disc golf course in-house, which helped to keep the project’s cost down, Handlon said.

While laying out the course’s design, Monroe said he attempted to keep shots away from the park’s playgrounds and walking trails.

“The beauty of this course is that it will be a training ground for beginners and families,” Monroe said, praising Veterans Park for offering activities for every member of a family.

“This is a family activity that the entire family can get out and enjoy spending time together,” Handlon said.

The Alabaster course joins several others in the Birmingham metro area, including courses at George Ward Park in Birmingham, on the University of Montevallo campus and off U.S. 280.

“It’s amazing. If you build it, they will come,” Monroe said.

Helena players and fans celebrate after earning a last second victory on the road at Oak Mountain on Friday, Jan.... read more