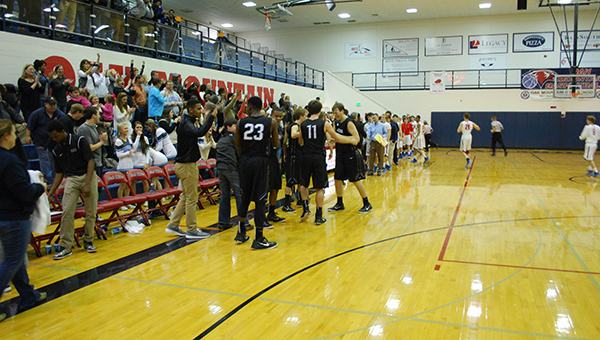 Helena players and fans celebrate after earning a last second victory on the road at Oak Mountain on Friday, Jan. 30. (Reporter Photo/Graham Brooks)

NORTH SHELBY–In a thrilling game that came down to the last second, the Helena Huskies were able to battle back late in the game and steal a 59-58 victory on the road.

The Huskies were down by three with less than a minute to go until Paul Brown hit a three-pointer to tie the game at 58 with 20 seconds left in the game.

Oak Mountain then turned the ball over on their next possession and Brown raced toward the other end of the floor where he was intentionally fouled by Oak Mountain’s Warren Shader with just 0.4 seconds left in the game.

Brown sunk one free throw and that was all the Huskies needed to grab the victory on Oak Mountain’s senior night.

“I was real proud of our guys,” Helena Head Coach Chris Laatsch said after the game. “Coach Love always does a great job and he had them really prepared. Coming into a 7A place on senior night and the electricity and atmosphere against a really well coached team and our kids fought and kept their poise and we just didn’t get rattled and showed great toughness.”

The game was a back and forth affair all night in a loud environment from the start.

Trevor Smith of Helena had his best game of the year, scoring 12 points and collecting 11 rebounds on the night.

Brown also finished with 12, including the game-tying and game-winning points.

Payton Youngblood of Oak Mountain finished with a game-high 18 points in a losing effort.

Helena will travel to Central Tuscaloosa on Tuesday, Feb. 3 to face Calera in the area tournament.