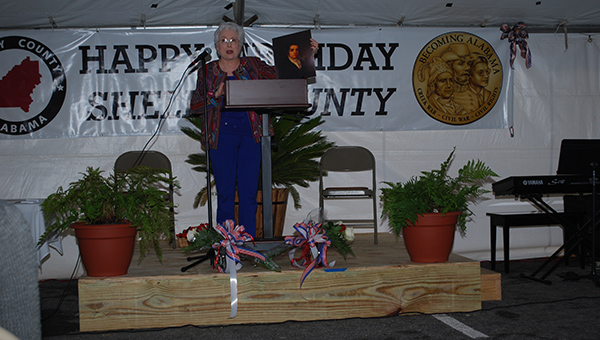 The celebration was kicked off with prelude music from the University of Montevallo department of music where guests huddled under a big event tent to take in the festivities on a dreary afternoon.

Shelby County began the birthday celebration in 2010 and Seales has had a big part in recognizing the history of Shelby County since he became president of the historical society in 1999.

“The opportunity to be with so many people is great and I appreciate the state tourism making it possible for us to receive these grants to be able to have these tents,” Seales said about his favorite part of the birthday celebration. “There’s no way we could’ve had this event today in our building because of the space so we were very fortunate to acquire those three grants.”

They are all competing for a $1,000 scholarship by making a digital presentation of the history of Shelby County.

Seales will be retiring from his position on Nov. 1 but noted the historical society has made great strides since he became president in 1999.

One of those accomplishments is that the Shelby County Historical Society has grown from 200 members to more than 900 members over recent years and Seales would like to see continued growth after his retirement.

The guest speaker was Associate Professor of History Dr. Harriet E. Amos Doss, she spoke on the life of Gabriel Moore, a founding father of Alabama.

Guests were treated with refreshments after the celebration presentation and could also explore various tables with information on historical Shelby County offerings.