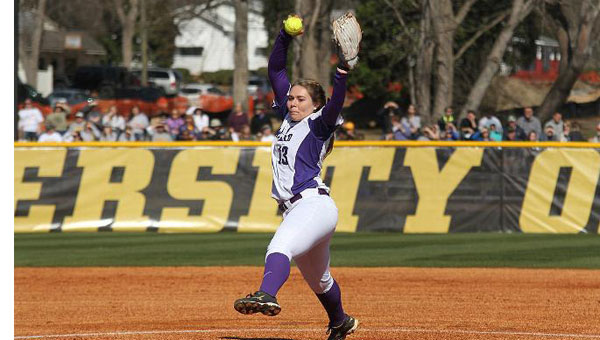 Jostlyn Higgerson went 2-0 on the weekend against West Alabama in Montevallo’s first ever softball games. (Contributed)

MONTEVALLO– The University of Montevallo softball team played its first ever games on Saturday, Jan. 31. Opening Day for the Falcons is one that will never be forgotten, as they won both games against West Alabama in dramatic, walk-off fashion. The Falcons took the first game 6-5 after a two-run hit from Sydney Aguilar and won the second 9-8 after a bases clearing double from Dylan Bailey.

It was an historic afternoon for the University of Montevallo, as a crowd of a thousand fans filled the newly built stadium at Orr Park, welcoming softball as the next sport to join the Falcon family.

Junior Jostlyn Higgerson was the starting pitcher for Montevallo, striking out Lydia North in the first ever at-bat at the stadium.

In the bottom half of the inning, Higgerson’s teammates backed her up with run support.

Celestia Davila scored the first run in the bottom half of the first, scoring after a double by Phoebe Dabbour drove home a pair. Dabbour’s double was the first hit for the Falcons in program history, as Davila and Hannah McCreless scored after reaching on walks.

The UM lead extended throughout the game, with Kelsey Vining and Bailey scoring runs in the third and fourth innings, respectively.

Two home runs from West Alabama drew the game even at four runs apiece, and the Tigers took the lead in the top of the sixth.

In the bottom of the seventh, trailing by one, the Falcons came storming back to earn the dramatic win in the first game in program history. Aguilar drove home the winning runs for her first hit of the game and forever cemented her place in the Montevallo history books.

The second game featured a different lineup for Montevallo, but a familiar result. Jessica Mentzer, who did not have an at-bat in the first game, hit two home runs in game number two.

Montevallo (2-0) will be on the road next weekend, traveling to Huntsville for the UAH Chillout Tournament. Their first games will be Friday, where they will play Kentucky Wesleyan followed by Delta State.