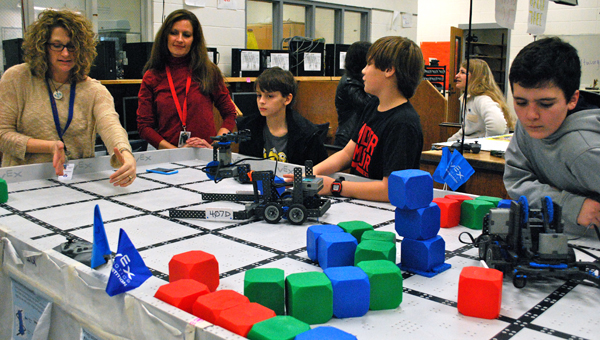 NORTH SHELBY—Students crowded around a table as two robots raced against the clock to sort and stack colored blocks. Another pair of students knelt next to a larger robot, examining its moveable claw.

Although it sounds like something out of a movie, this was just a scene from a joint practice between the Oak Mountain Middle School and Oak Mountain Intermediate School robotics teams on Jan. 30.

“We’re hoping to be able to really get the kids to collaborate,” OMIS fifth grade teacher and robotics sponsor, Dana Furman, said.

During competition, opposing teams are paired up and must work together to complete tasks with their robots, Whitehead explained.

“You don’t know who you’re teamed up with until shortly before the competition starts,” Whitehead said. “In a matter of minutes, you’ve got to come up with a game plan.”

In addition to building teamwork and communication skills, robotics reinforces many of the lessons the students learn in the classroom, Furman said.

“It makes all the pieces that we teach them in class come together,” Furman explained. “It shows how important the math and the physics that we cover is.”

As the inaugural year for both the OMIS and OMMS robotics teams, the students started out by building a robot from a kit, however they quickly moved on to building and programing their own unique designs.

“They went through and did the step by step, and then they designed their own,” Furman said, noting her students “just took it and ran with it.”

Both teams have experienced quick success, and the OMIS team is preparing to compete in the state-level competition on March 7. But more importantly, Whitehead and Furman said their students have enjoyed the experience.

“They love it,” Whitehead said. “It brings excitement back to the classroom.”

Brock’s Gap Intermediate School students work together on a program for their robot during the Jan. 31 Super Bowl Challenge... read more