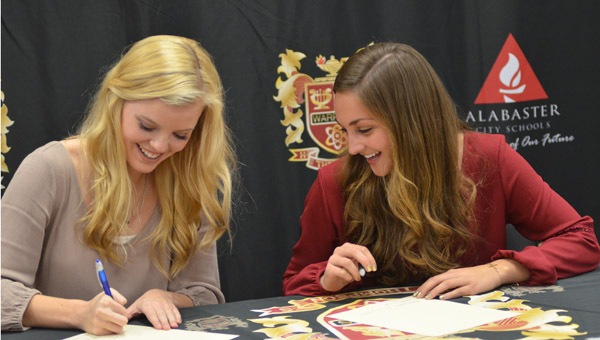 ALABASTER- The opportunity to play a sport in college is a dream every high school athlete harbors on some level. Turning that dream into a reality is a feat reserved only for those athletes who are talented and dedicated enough to put in the necessary time and effort to reach that goal.

On Monday, Feb. 2, two lifelong friends and teammates signed letters of intent to continue their on-field success for another four years at the college level.

Brittany Yoder and Amber Harless, both seniors who play on the Thompson High School girls’ soccer team, penned their names to paper to finalize their decision to jointly take their talents to Troy University to join an upstart Lady Trojans’ soccer team.

“We really wanted to play together,” Harless said. “That was really important to us.”

Harless also cited the broadcasting major that Troy offers as influencing her decision to attend the university, as she has been interested in broadcasting since she was a freshman at Thompson.

Harless, who plays forward for Thompson and has 77 career goals to go along with 45 career assists, has been named to the Alabama All-Star team in each of the previous three seasons.

Yoder, who plays midfield and plans to major in nursing upon her enrollment at Troy, was voted First Team All-Metro and First Team All-County in 2014, as well as being voted best all-around by her teammates on the 2014 squad.

“Everything just came together for us,” Yoder said, in reference to the two playing together at Troy.

Harless and Yoder, who have been playing together since they were little, understand the changes they will be faced with in the coming months, which brings about a full spectrum of emotion. The future can be both a disconcerting and exciting idea all at the same time, and both Yoder and Harless relayed this idea. However through it all, they are happy they will be together.

“The opportunity to improve and constantly get better at the college level, and to do it together, is very exciting,” said Harless.

Thompson girls head coach Nathan Button sang the praises of his two athletes as well, saying they are “two fantastic kids, both on and off the field.”

Panthers pull out tight senior night contest in the fourth

Drew Thomas of Thomspon passes up the floor during Thompsons 44-47 loss at Pelham on Jan. 30. (Reporter Photo /... read more