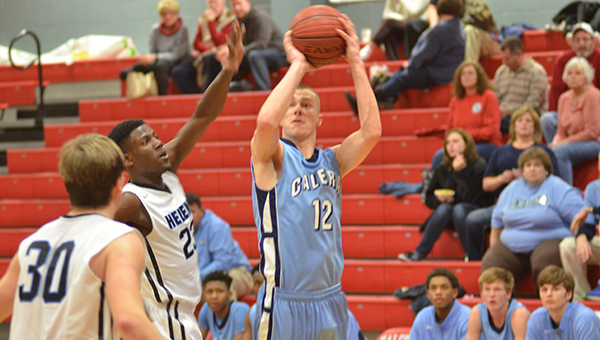 Drew Marling (12) of Calera attempts a shot in an area tournament game against Helena. Helena won 48-47 to advance to the finals on Thursday, Feb. 5. (Reporter Photo/Graham Brooks)

TUSCALOOSA–The past two games for the Helena Huskies have been about toughness and finishing in the fourth quarter, and it was no different against Calera on Tuesday, Feb. 3, as a clutch plays down the stretch earned Helena a 48-47 win in the first game of the Class 5A Area 7 Tournament.

The game started with a back and forth first quarter that ended with the Huskies leading 13-12.

In the second quarter, Calera’s defensive pressure coupled with a missed dunk and technical foul on Helena propelled Calera to regain momentum and take a 25-19 halftime lead.

However, Helena would fight back just like in previous games. Led by Jon Brown’s 13 points in the game, Helena slowly cut down the Eagles lead and tied the game at 35 heading into the final quarter.

The fourth quarter was filled with drama down to the last second.

Calera was down 45-46 until Ladairus Barnes hit a two-pointer with 37 seconds left that saw the Eagles regain the lead 47-46.

Helena needed a basket to go back ahead and they did just that, as Brown scored to make it 48-47.

On Calera’s last possession, Barnes three-pointer hit off the back of the iron and Helena gained possession and survived to move on in the tournament.

Helena Head Coach Chris Laatsch thinks the past weeks games had a lot to do with his team’s success against Calera.

“That’s three games in a row that we’ve been down to have to come back and win,” said Laatsch. “Which, as young of a basketball team as we have is really encouraging. I’m impressed by them and the magnitude of it being an elimination game. They didn’t get rattled and just kept competing and kept believing. I think the two big wins last week gave them confidence tonight.”

Helena will move on to play Central High School in the finals of the Class 5A Area 7 Tournament on Thursday, Feb. 5 at 7:30 p.m. in Tuscaloosa.

Helena players and fans celebrate after earning a last second victory on the road at Oak Mountain on Friday, Jan.... read more