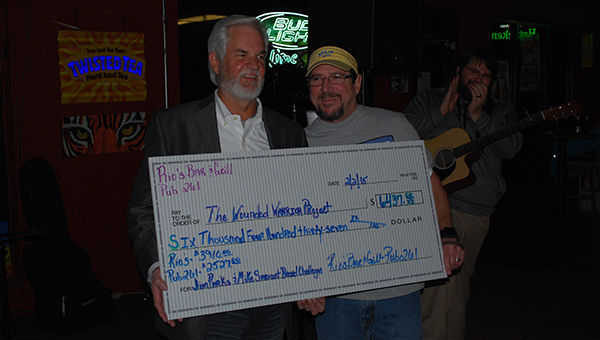 HELENA–No Shave November may be over, but that didn’t stop two Shelby County residents from raising $6,437 resulting from a beard growing challenge.

What started out as just a “stupid bet,” as described by Helena resident Jim Parks, turned in to $6,437 raised for the Wounded Warrior Project.

Parks was challenged by one of his good friends, Mike Sarvaunt, co-owner of Pub 261 in Pelham, to grow a beard back in December and Sarvaunt pledged to donate $100 to a charity of his choice.

Both Parks and Sarvaunt put down their razors and after telling people by word of mouth about their challenge, money started to pour in from friends and residents wanting to help in the challenge.

Parks is a frequent visitor to Rio’s Bar and Grill in Helena and customers and friends helped Parks raise money through bingo cards, 50/50 raffle tickets and cash and check donations.

Sarvaunt did much of the same, getting donations from his friends and residents.

On Monday, Feb. 2, a special presentation was held at Rio’s where Parks and Sarvaunt presented the check to The Wounded Warriors Project.

“This started out as a silly $100 bet to who could grow the prettiest beard,” Parks said before presenting the check. “Six thousand four hundred thirty seven dollars is incredible and it’s the good people who helped accomplish this. You don’t have to be a military vet to appreciate something, you just have to appreciate these guys who give it all. I didn’t get the privilege of serving but I’m serving now, and I just do what I can.”