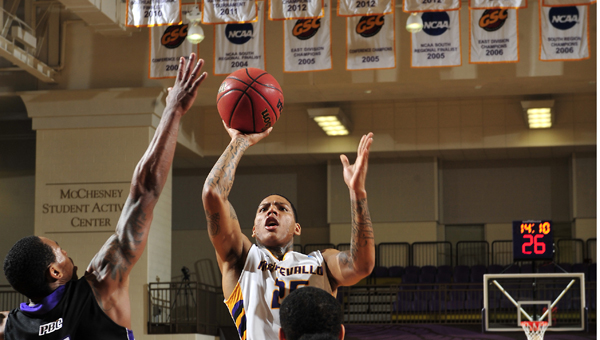 Troran Brown and Montevallo are in control of the Peach Belt after their 83-64 win over Armstrong State. (Contributed)

MONTEVALLO– University of Montevallo seniors Troran Brown and Larry Slaughter combined for 40 points in the Falcons’ 83-64 win over visiting Armstrong State University, which puts the Falcons in the driver’s seat for the Peach Belt Conference regular season championship.

The Falcons (15-7) now lead the conference standings with an 11-1 mark in conference play with seven games left in the regular season.

Brown and Slaughter scored 20 points each in the victory. Slaughter added a game-high 15 rebounds while shooting 6-of-8 from the field and 8-of-21 from the charity stripe. Slaughter’s 21 attempts are the second most in a single game in program history.

Brown finished 6-of-14 from the floor, including 4-of-11 from beyond the arc.

Junior Shykeem Jackson, who shot 6-of-13 from the floor and 4-of-9 from 3-point range, contributed 18 points, eight rebounds and five assists. Sophomore Ryan May scored 11 points on 4-of-9 shooting from the field, including 3-of-6 from beyond the arc.

The Falcons opened the contest with a 39-14 run, with Slaughter capping the run with a thunderous dunk with 4:37 remaining in the opening half. Montevallo led 46-28 at the break with Brown draining a jumper at the buzzer.

The Pirates cut the deficit to 68-54 following a layup by Trey Suttles with 6:30 remaining in the game, but the Falcons were able to go on an 11-1 run over the next five minutes.