Kingwood boys and girls finish third in region, will compete in Elite Eight 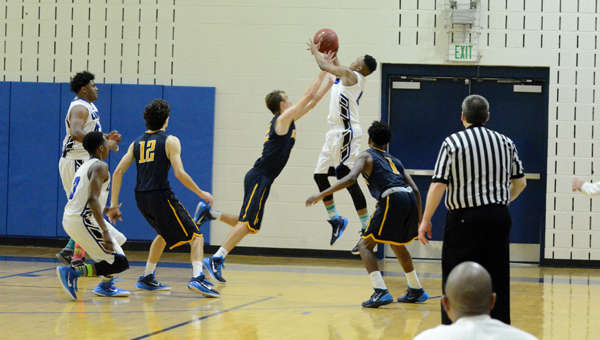 Kingwood (white) will look to make some noise in the 3A AISA Elite Eight tournament which begins on Feb. 5. (Contributed)

MONTGOMERY- Both the Kingwood Christian School boys and girls teams will be competing in the 3A AISA Elite Eight state basketball tournament beginning on Feb. 5.

Both teams finished third in region play last week, with the boys dropping their final game to Bessemer Academy and the girls losing to Glenwood Academy.

They will both look to bounce back moving into the single-elimination Elite Eight as both teams are on the brink of memorable seasons.

The girls team, which has been led all year by Zarria Morgan, will play Autaga Academy on Feb. 5 at 3 p.m. at Huntingdon College in Montgomery. The boys, who have been led by All-3A tournament recipient Justin Gibson, will take on Pike Liberal Arts School at Huntingdon at 1:30 on Feb. 5 as well.

Both schools are competing for bids to the Final Four.

Drew Marling (12) of Calera attempts a shot in an area tournament game against Helena. Helena won 48-47 to advance... read more