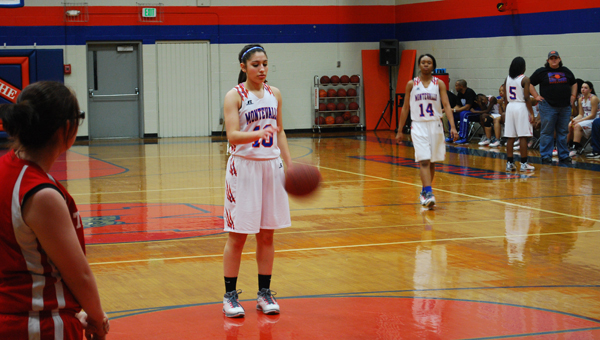 MONTEVALLO- In a Wednesday night matchup that pitted 4A area 7 regular season champions Montevallo against the Oak Grove Lady Tigers, the Lady Bulldogs made short work of Oak Grove, jumping out to an immediate lead and putting an end to this game before it truly got started.

Montevallo got on the board first behind a three-point play from Lauren Lilly, followed by another quick basket by the freshman Lilly. Montevallo put on their stingy press, and the game plan for Oak Grove unraveled. The Lady Tigers had extreme difficulty getting the ball across half court, much less getting a clean look at the basket in the first quarter. The Lady Bulldogs turned them over repeatedly in the backcourt, and followed up their own misses easily, essentially shooting on offense until they scored, got fouled or both. The final score at the end of the first was 23-2.

The score going into the half was 38-6. Montevallo backed out of their press in the second, but their half court defense was just as effective against Oak Grove, who had difficulty all night finding a good shot.

The second half was played more evenly, as Montevallo’s starters saw much less action. Oak Grove was able to win the scoring margin in the second half, beating out Montevallo 22-19 over the last two quarters. The damage was more than done, and the game ended with Montevallo continuing it’s season by a final of 57-30.