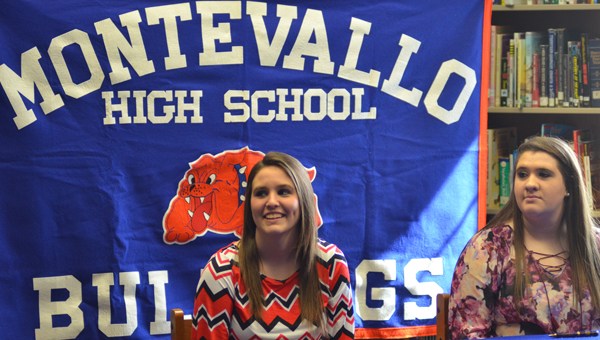 MONTEVALLO- When Isabella Howell and Kaylee Smith made the trek to Wallace Community College in Selma for a weekend volleyball tryout right around Christmas break, neither was sure of what their future would look like. Smith was attending the tryout for a position she was not familiar with, and Howell was not sure she wanted to continue playing volleyball.

“I didn’t really want to play in college for a while,” Howell relayed. “I told them (Wallace coaches) I would feel more comfortable if she (Smith) came with me. Because I like warming up with her.”

Smith on the other hand felt like she could continue to play the game, but wasn’t necessarily sure what that would look like post high school.

“I knew that I didn’t want my volleyball to end,” Smith said. “I’ve always had the determination to be better and play more. So when I found out about the tryout, it wasn’t even my position that they were looking for, but I knew if I went there and showed them that I’m good they would see something. I’m glad they did.”

The pair has been playing volleyball together since seventh grade, and are self-described best friends who will room together at Wallace Community as they begin their collegiate careers.

Both girls were left in limbo after the tryout, not finding out they were being offered an athletic scholarship until after the first of the year.

“It made us worried, but finally we found out they wanted us,” Howell said with a laugh.

Howell, who originally was not convinced she wanted to play in college, is now excited about the opportunity to play with her best friend and go on road trips that will take the team outside of the state to compete.

Head volleyball coach Tena Niven also sang both girls praises, lauding Smith for her ability to achieve a scholarship to play a position foreign to her, and praising both of them for being stand-up student-athletes.

Both girls will report to Wallace in July.

Kingwood boys and girls finish third in region, will compete in Elite Eight

Kingwood (white) will look to make some noise in the 3A AISA Elite Eight tournament which begins on Feb. 5.... read more