ALABASTER – A 26-year-old Alabaster man is being held in the Shelby County Jail without bond after he was charged with driving under the influence of alcohol while he was on probation for multiple felony rape charges. 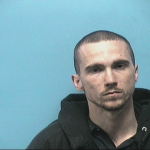 The Alabaster Police Department arrested Cory James Spangler, who previously listed an address on Massey Road in Alabaster, on one count of DUI on Oct. 28, 2014. The arrest came after an Alabaster police officer received a report of a suspicious vehicle in the parking lot of the Propst Promenade shopping center.

When the officer arrived on the scene, he discovered Spangler in the vehicle and allegedly found an open “Four Locos” alcoholic beverage in the center console.

Spangler then failed a field sobriety test and recorded a 0.194 blood-alcohol content on a Breathalyzer test before he was arrested.

When he was taken into custody on the DUI charge, Spangler was on probation for multiple second-degree rape charges he pleaded guilty to in April 2012.

Alabaster police arrested Spangler on the rape charges in June 2011 and charged him with raping three 15-year-old girls and a 14-year-old girl. At the time of the rape arrests, Alabaster Police Chief Curtis Rigney said Spangler provided the underage girls with illegal narcotics before enticing them into sex.

Spangler received 280 days of credit for time served in the Shelby County Jail before his guilty pleas, and was serving his five-year probation period when he was arrested on the DUI charge.

After Spanlger was arrested on the drunken driving charge, his probation was partially revoked, and he was sentenced to 180 days in prison and received 82 days of jail credit.

The SCSO urges county residents to remain vigilant as car burglaries are on the rise. (File) By MOLLY DAVIDSON /... read more