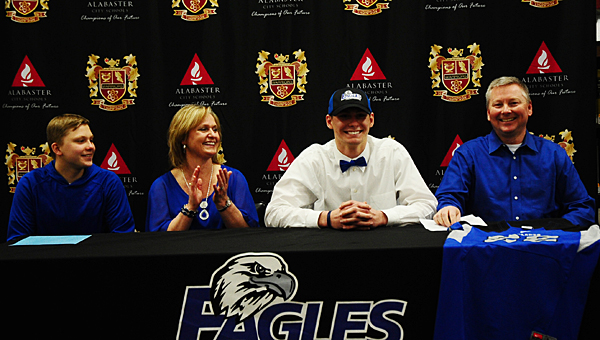 ALABASTER – Before he even entered elementary school, Kyle Sample saw Thompson High School’s Larry Simmons Stadium, and immediately knew where he wanted to play one day.

“Right after we moved to Alabaster (in 1999), we drove by the football stadium and Kyle said ‘I’m going to play football right there,’” Kyle’s father, Danny, said. “He has always had a desire to play football.”

“That was the dream,” Kyle Sample said with a laugh when asked about his father’s story. “Since we accomplished that, we are going to take it to the next level the Lord has given me.”

While the chance to play for the Faulkner Eagles in the National Association of Intercollegiate Athletics weighed heavily on his decision to attend the Montgomery university, Kyle Sample said the school’s academic offerings won him over.

“Education was the most important thing,” he said, noting he plans to major in criminal justice. “The coaches have been really great to me. It’s like family.”

Danny and his wife, Tammy, said Feb. 4 was a significant milestone for their family.

“It’s been a long journey watching him grow from youth league to now,” Danny Sample said. “He lives, eats and breathes football.”

Although THS Principal Chris Tangle only got to see Sample in action for one football season, the senior defensive back earned his respect on the field and in school.

“He has worked real hard to get to where he is today. He took care of business on the field and in the classroom,” Tangle said. “We talk so much about continuing to the next level. Buddy, you’re going to get a chance to do that.”