After 50 years, Gold’s Gym is still pumping it up. 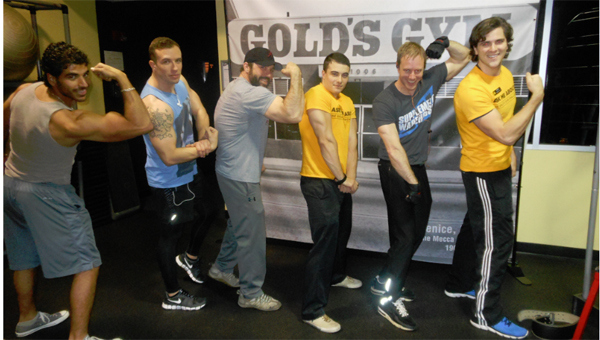 Gold’s Gym has been around for 50 years, and continues to accommodate both professional athletes and the everyman. (Contributed)

This year Gold’s Gym celebrates its golden anniversary and it is not showing any signs of slowing down. In fact, January is the busiest time of year for the franchise due to an influx of new members arriving with New Year’s resolutions to get into better shape. According to Gold’s Gym fitness consultant Jeremy Helfinstine, who currently works at the Pelham chain, the incursion is short lived.

“With the new members that join in January, unfortunately we see that they start to drop out around the summertime,” said Helfinstine. On average, memberships usually last around 18 months because most people prefer to work out on their own rather than with a personal trainer.

Since its beginnings Gold’s Gym has been the Mecca for bodybuilders, athletes and movie stars but it also doesn’t shy away from trying to accommodate the everyman.  “The atmosphere that we create here in a way kind of resembles Planet Fitness. We want you to come as you are and everyone has different goals. We’re here to train, we’re here to work out and help you achieve your goals” said Helfinstine. However, that doesn’t mean they shy away from celebrities, especially professional athletes. “We have CJ Mosley come in here every now and then. He’ll come down from Baltimore and work out every now and then,” said Helfinstine.

Also from now until spring, Gold’s Gym has issued a 12-week fitness challenge to promote healthy New Year’s resolutions. Participants are divided into their appropriate age groups and compete to see who has the best body transformation over that time. The winners will not be based on total body weight lost, but rather on overall transformation. The cash prizes prize for each age group is $6,500 for first place, $3,500 for second place and $1,500 for third place.

Helfinstine also added that “the winners of each location, here in the state of Alabama, will also go amongst the ones all across the U.S.”  Gold’s Gym is always accepting new members and you can sign up at a location near you today.