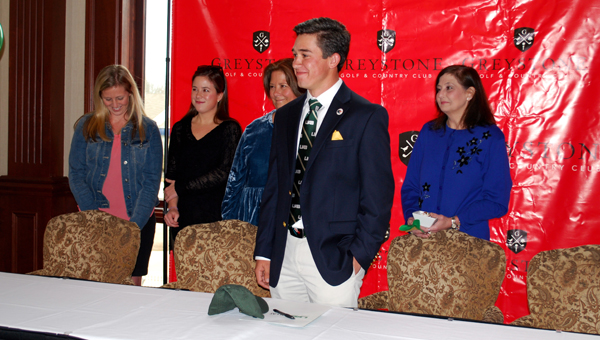 NORTH SHELBY- On Feb. 4, John Hayden decided to stay close to home. The Briarwood senior signed his letter of intent to accept a golf scholarship from the UAB Blazers, where he will take to the links this fall.

“I love the coach, the people on the team and the program,” Hayden said. “In my mind there’s not a better place to go.”

Hayden, who was taken on his first golfing outing by his second-grade teacher, can shoot in the mid-60s, said his his career-low round is either a 65 or a 66, and he hopes to shoot in the high-to-mid 60s with more consistency moving into the college game.

“If I can stay consistently there, then I should be okay,” Hayden said with a smile.

At the college level, golf is broken into a fall and a spring season, so Hayden will hit the ground running when he arrives on campus.

“August to November and then February to March (are the timeframes for the seasons),” Hayden said. “So it’s like two months basically for each season, but they’re pretty intense two months.”

Hayden also held offers from Mississippi State and South Alabama, and Southern Mississippi was also very interested in Hayden as well before he told the coaches and schools he was staying home.

“Normally people will email them (coaches) to tell them they aren’t coming,” Hayden said. “But I was like, ‘I’m not going to email them and tell them,’ after all the time they put in (to recruiting), so I called all the coaches to say I was ready to be a Blazer.”

A well-spoken and polite kid, Hayden has also raised a significant amount of money for the Bradley Johnson Memorial Foundation to the tune of $42,000. The foundation provides funds for underprivileged golfers to participate in USGA tournaments.

Turning to the next chapter of his golfing career, Hayden is constantly trying to improve his game. He’s hoping to contribute to the team when he gets on campus in the fall.

“I was out with my swing instructor yesterday actually,” Hayden said. “It’s going well. Hopefully I can really get going before college.”