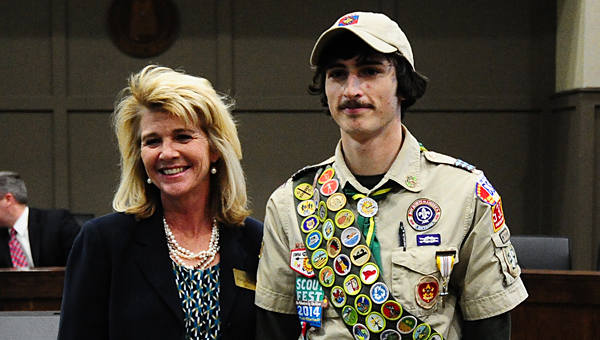 Eagle Scout Matthew Renna, right, joins Alabaster Mayor Marty Handlon at a Jan. 26 City Council meeting, during which Renna was recognized for his contributions to the community. (Reporter Photo/Neal Wagner)

ALABASTER – An Alabaster teen’s contributions to Montevallo’s American Village earned him praise from the Alabaster mayor during a recent City Council meeting.

During a Jan. 26 City Council meeting, Alabaster Mayor Marty Handlon presented a proclamation to Matthew Renna, honoring the Boy Scout’s “commitment to excellence” in his endeavors.

Renna, who is a member of the Helena-based Boy Scout Troop 532, recently earned his Eagle Scout badge, which is the highest honor a Scout can achieve.

While working to earn his Eagle Scout badge, Renna left a lasting legacy at American Village off Alabama 119 in Montevallo by planning, organizing and raising funds to build and install a replica of a Wampanoag Native American fort wall in the Native American section of the village.

“The Eagle Scout award is a distinction which will follow Matthew throughout life, and will be a beacon to others of the leadership quality and commitment this young man has shown,” Handlon said during the meeting, noting Renna epitomizes the qualities of honor, loyalty, courage, cheerfulness and dedication.

Before receiving the proclamation, Renna led the council and a packed room of Alabaster residents in the Pledge of Allegiance.

He has also served on the staff of National Youth Leadership Training, and is a member of the National Society of the Boy Scouts of America’s Order of the Arrow.