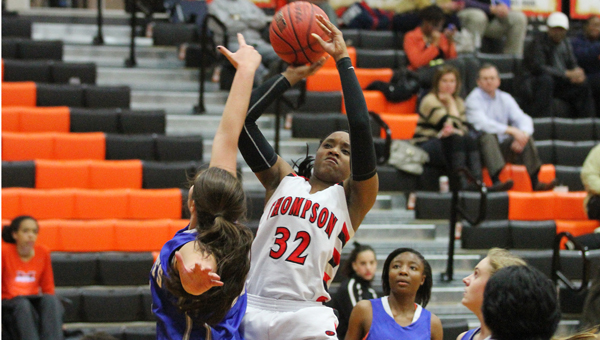 HOOVER- The Thompson Lady Warriors kicked off area tournament play with a first-round win over the Lady Wildcats of Tuscaloosa County on Feb. 4.  The 59-32 win sets up a rematch between the Lady Warriors and the Lady Bucs from Hoover on Saturday evening.

Tuscaloosa County spent the first quarter trying to control the tempo of the game and the result was that they trailed by just two points at the end of the frame.

After an early timeout taken by Thompson’s head coach Josh Golden in the second quarter, the Lady Warriors took control of the game.  By running the floor and controlling the boards both on offense and defense, the Lady Warriors outscored the Wildcats 14-5 and took a 30-19 lead to the locker room.  Azariah Jackson, Miyel Miller and Jordan Lenoir finished the night with 5 rebounds apiece.

Thompson continued to coast in the second half with Janese Richardson leading all scorers with 15 points, 3 steals and a blocked shot.  Kelsea Bivens and Brittany Grice pitched in 13 and 11 points respectively.