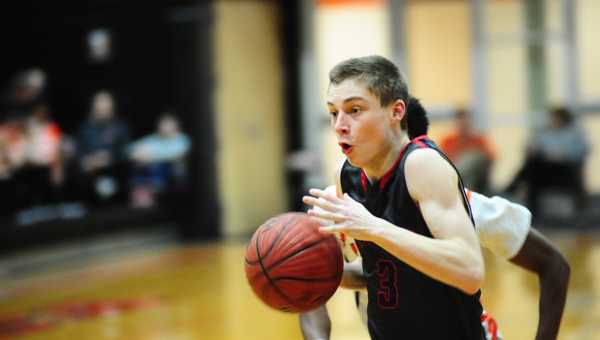 Will Stephenson of Oak Mountain looks to get into the lane during the Eagle’s Feb. 5 area tournament against Hoover. Hoover beat the Eagles in a close game, 44-35. (Reporter Photo / Baker Ellis)

HOOVER- In the second game of the opening round of the 7A area 6 tournament, tournament host Hoover took on the Oak Mountain Eagles in a close contest that saw the Bucs escape with a win.

Oak Mountain came into the game a significant underdog in their matchup with area regular season champion Hoover, but did not play like an underdog on this night. Dylan Smith of Hoover opened the scoring, and the Bucs jumped out to a quick 6-2 lead before Gabe Haynes and Yeadon Patrick were able to pull the Eagles even at 8-8. A Matthew Calhoun and a Maurice Brown three-pointer gave the Bucs a 14-8 lead going into the first break.

Another quick Brown three opened the second quarter and gave the Bucs a 9-point advantage. Hoover was pressing the Eagles after every made basket, and their speed and length was causing problems for Oak Mountain’s guards. Payton Youngblood, the Eagles’ best athlete, scored a bucket late in the second, and the halftime score was 25-15 in favor of the Bucs.

Oak Mountain came out of the gate motivated to start the second half, and ripped off a 7-2 run to open the third quarter to pull the score to 27-22. The third quarter was relatively low scoring, with both teams playing good defense, and both teams missing some shots they would have loved to have back.

Heading into the fourth quarter, Youngblood hit a tough inside bucket and was fouled. After hitting the free throw the Eagles were within 4, with the score standing at 31-27. Youngblood played the entire fourth quarter with 4 fouls, and had to play less aggressive defense than he had been earlier in the game. Hoover’s Smith would turn out to be the difference in the fourth quarter, going 7-8 from the charity stripe and adding another bucket for good measure to give him nine points in the final period. Youngblood fouled out with less than two minutes to play in the game. The Eagles could not get any closer than six the rest of the way, and would go down by a final of 44-35.

Smith finished with 15 to lead all scorers in this low-scoring affair. Youngblood led the Eagles with 12 in Oak Mountain’s last game of the season.