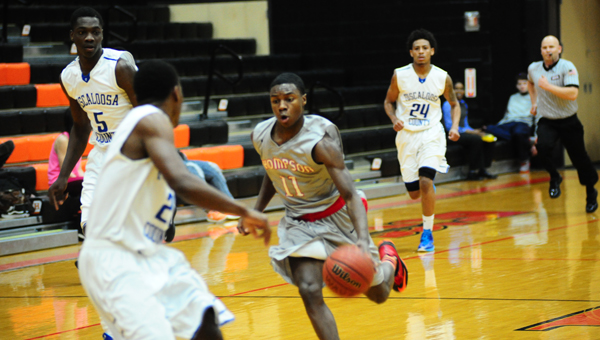 Thompson’s Drew Thomas drives into the lane during the Warrior’s area tournament game with Tuscaloosa County on Feb. 5. Thompson fell to Tuscaloosa Co. by a final of 73-63. (Reporter Photo / Baker Ellis)

HOOVER- The 7A area 5 tournament saw first round action on Feb. 5, with the Thompson Warriors and the Tuscaloosa County Wildcats taking the floor for the first game of the evening at Hoover High School. The Wildcats would prove to be too much on this night, ending Thompson’s season with an early first-round exit.

Thompson got on the board first on this night behind a three from Demonte Caffey. The early action was back-and-forth with both teams exchanging baskets. The Warriors used a 5-point behind a late three from Drew Thomas to go into the first break down 1, 11-10. An early second quarter bucket from Thomas gave Thompson a brief lead at 12-11 before the wheels fell off for the Warriors. Tuscaloosa County began to cause problems in the backcourt for Thompson and used a 13-0 run catalyzed by Justice Green, Eddie Williams and Justin Guy to take a 24-12 advantage. Rashad Strother hit a three for Thompson to pull the game back to within 10, before another 9-1 run from the Eagles, capped off by a Cletrell Pope alley-oop from Que Hall at the buzzer ended the half with the Eagles up 32-17.

The third quarter started off in the same vein as the first half, with Tuscaloosa County extending it’s lead to 44-24 midway through the quarter before Strother put on a one-man shooting extravaganza. Strother went on a personal 18-4 run midway through the third, and one of his shots was questionably called a two instead of a three. Thompson was feeding Strother, who was putting on a Herculean performance in the third to bring his team all the way back to within six at 48-42. Four quick points for Tuscaloosa County ended the third quarter with the Eagles up 10.

Thompson would get close a few times in the fourth, at one point pulling within 7 behind back-to-back three-pointers from Thomas. However Tuscaloosa County was able to hit free throws down the stretch to seal the game 73-63.