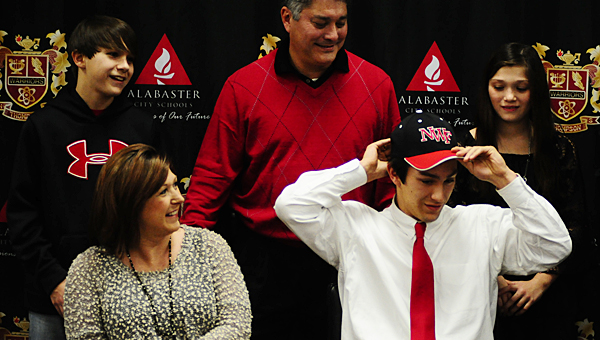 Northwest Florida State College offered the major he planned to take and was known for its strong baseball program. But when Poplin visited the campus, he discovered the icing on the cake.

“They have a good program, it’s a good pitching school and it’s close to the beach,” Poplin said as a smile spread across his face before his Feb. 6 scholarship signing ceremony in the THS library.

Poplin inked his scholarship surrounded by friends, teachers, coaches and teammates a few weeks before his senior baseball season kicked off at THS.

“He’s going as a pitcher, but they are going to give him some opportunities to play in the field as well,” said Poplin’s father, who is also named Stephan. “He’s been playing since he was 3, and he has worked really hard to get here. It’s real gratifying to see all of his hard work pay off.”

The high school senior said he plans to continue his baseball career at Northwest Florida State before possibly transferring to a Division I school in the future. He plans to major in physical therapy.

“He had a great year for us last year and the year before that,” THS head baseball coach Pat Hamrick said. “We look forward to what he is going to do next year at Northwest Florida State and what he’s going to do for us this year.”

As for one day pitching in the Major Leagues?

“That’s the dream,” Poplin said with a laugh.