Want to have a voice in Alabaster’s future? 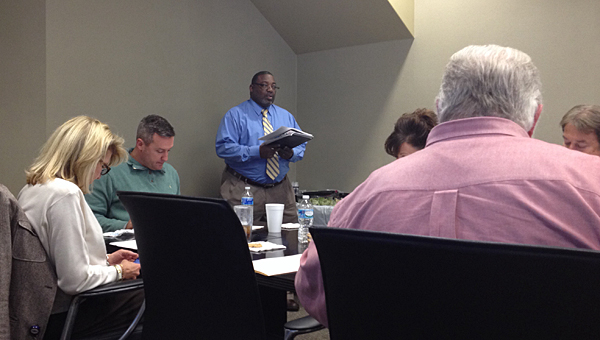 ALABASTER – Alabaster residents will have several chances to have a voice in the city’s future over the next few months, as the city has set public meetings through its comprehensive plan update process.

During the meetings, city residents will be able to share their thoughts on the direction Alabaster takes in the future, Regional Planning Commission of Greater Birmingham representative Darrel Howard told City Council members during a Feb. 5 work session.

“We want to have lots of people come and give their input,” said Alabaster City Manager George Henry. “We will also have online surveys.”

During a September 2014 meeting, the council voted unanimously to pay $34,500 to match $172,000 in Regional Planning Commission of Greater Birmingham to fund a new comprehensive plan for the city.

The city’s current comprehensive plan was formed more than nine years ago, and does not reflect “current development, goals and visions of the community,” according to the resolution passed by the council.

Part of the comprehensive plan will focus on revitalizing the “Old Siluria” area around the new Alabaster City Hall, which could see an overlay district to determine future development of the area.

City Council President Scott Brakefield said he would like to see the plan identify areas of the city without access to high-speed Internet.

“That is a complaint I hear quite often,” Brakefield said.

The first public meeting will be on March 10 at 6:30 p.m. at Alabaster City Hall, and will focus on the vision for the city and its assets, needs and opportunities.

A design charrette will be held over multiple days from April 27 through May 1 at Shelby Baptist Medical Center and Alabaster City Hall, and will focus on the future of the city’s Medical Mile and the Siluria area.