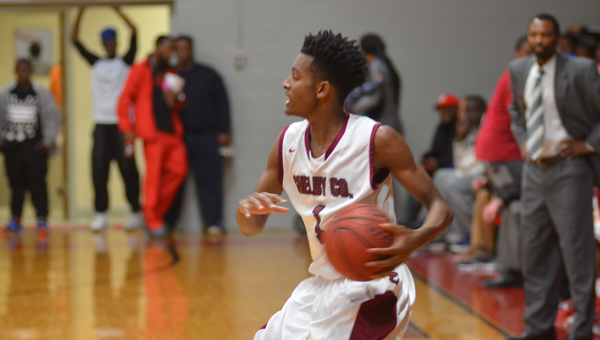 COLUMBIANA- In the Feb. 7 5A Area 8 tournament championship at Shelby County High School, the Shelby County Wildcats dropped a nail biter to the Talladega Tigers by a final score of 62-57.

Shelby County and Talladega, ranked sixth and third respectively in class 5A as of the latest ASWA poll, put on quite a show on this evening, with both teams showing why they will be a very tough out in the state tournament, which will start next week.

Talladega used a combination of a 1-2-2 half-court trap and a full court zone press throughout the game, and kept the Wildcats from ever truly finding an offensive rhythm. Shelby County had a very difficult time on the boards on the night as well, with the Tigers dominating the game from a rebounding perspective, especially on the offensive glass.

The Eagles led after the first quarter by a tight margin, 15-14 behind sharpshooting from Justus Martin and inside buckets from Brandon Green. Martin and Green would carry the scoring burden for Shelby County on the night, scoring all but 6 of the Wildcats points.

Talladega was led by its backcourt combination of D’Angelo Scales and Juy Smeot, who continually put pressure on the Wildcats in the backcourt, and caused a number of turnovers that led to easy buckets. The two teams were tied at the half 31-31.

The same trends continued into the second half. Martin and Green continued to shoulder the scoring burden for the Wildcats, with Martin hitting open jumpers and Green slashing to the hole seemingly at ease at certain times. The problem for Shelby County continued to be a lack of rebounding and an inability to consistently set up their offense in the half-court, however the Wildcats went into the fourth quarter up 49-45.

The momentum shift in the final period was when Josh Madden drew an intentional foul midway through the fourth and hit both free throws to tie the game at 51 apiece. Madden and Scales would hit free throws down the stretch, and the Tigers would lock down Green and Martin to come away with the victory.

Both teams will move on to the 5A sub-regional tournament next week.