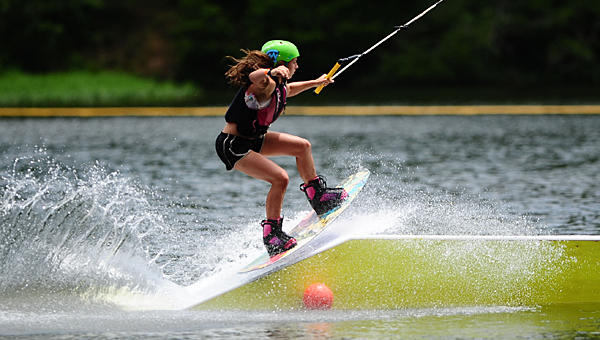 A young wakeboarder tackles the zipline obstacle course at Oak Mountain State Park in Pelham. Pelham recently was named one of the top Alabama cities for young families. (File)

Nerdwallet.com released its list of “Best Cities for Young Families in Alabama” on Feb. 9, and included Pelham, Calera and Alabaster in the top 15. Pelham came in at No. 5 on the list, Calera was named No. 9 and Alabaster ranked 11th.

“NerdWallet found the communities in the Yellowhammer State that offer young families the best combination of solid schools, great neighbors and affordability,” read the website.

Through the study, the website considered home affordability, prosperity and growth, quality of education as determined by Greatschools.org and family friendliness for all Alabama cities with at least 5,000 residents.

Pelham earned significant praise for its inclusion of Oak Mountain State Park, which is the largest in Alabama. The site also praised the city’s schools and home affordability.

“Pelham may be the best city on our list for active and athletic young families who want to push themselves,” read Pelham’s entry. “Athletic pursuits aside, residents enjoy a combination of affordability and good schools.”

Nerdwallet praised Calera’s inclusion of the Heart of Dixie Railroad Museum, and the city’s population explosion.

“Young kids love Calera because Thomas the Tank Engine makes a yearly appearance at the Heart of Dixie Railroad Museum,” read Calera’s entry. “Since 1999, median household incomes have jumped nearly 85 percent, and the population since 2000 has more than tripled, the highest growth rate in the entire state.”

By BAKER ELLIS / Sports Reporter MOUNTAIN BROOK- On Feb. 5, in a 7A Area 6 first-round tournament matchup between... read more