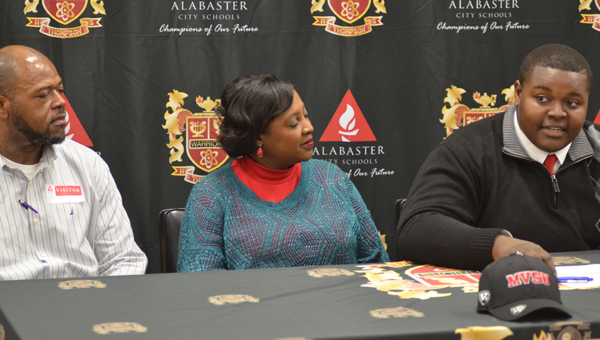 ALABASTER- Feb. 9 was the culmination of a long journey for Melvin Owens and his family. Owens, a Thompson High School senior, signed a letter of intent to play football for Mississippi Valley State University in the fall.

Owens, who will report to MVSU in July, is a 3.0 student who can’t remember a time without football.

The articulate and polite Owens played wherever he was needed for the Warriors’ offensive line during his playing days at THS, but will focus on his natural position of right guard when he arrives at MVSU, and hopes to play right away for the Delta Devils.

“Right now what they’re (coaches) talking about is I would come in and I wouldn’t have to redshirt,” Owens said. “I’ll have a chance to come in and play and compete.”

When making his college choice, Owens stated his decision came down to a combination of the inviting staff and players.

“I could tell the coaches really wanted me there,” Owens said. “I took my visit this past Friday (Feb. 6) and it really just felt like home. The players treated me like family when I walked in, they treated my family great, and the benefits were outstanding.”

The prospect of alleviating the burden of paying for a college education from his parents was important, and Owens is excited to be able to do just that while playing football.