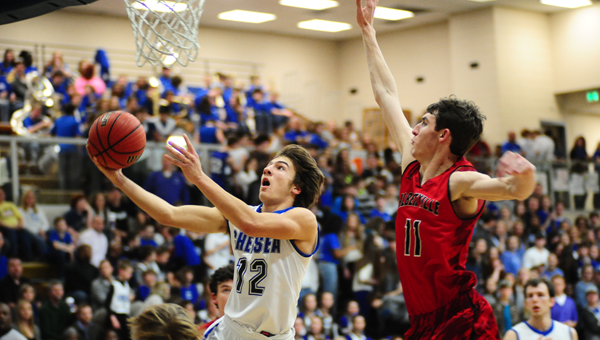 Matthew Marquett of Chelsea flies to the hoop against Ryan Brown of Albertville during the Hornets Feb. 10 82-77 overtime thriller of a win. (Reporter Photo / Baker Ellis)

CHELSEA- There are some nights in sports where destiny reaches out and touches a player, team or a gym and decides to turn an otherwise ordinary night into something extraordinary. Tuesday, Feb. 10 at Chelsea gym was such a night. The energy in the building was palpable from well before tipoff, and the line to get into the gym snaked itself well into the parking lot in the minutes preceding the game. Chelsea, fresh off its first area championship since 1986, played host to the Albertville Aggies who finished as the runners-up in the 6A Area 13 tournament after losing to an upstart Scottsboro team.

Chelsea, which has seven seniors, six of which play significant minutes, played with the emotions of the home crowd right from the opening tip, as both the Hornets and Aggies came out of the gate scorching hot. Chelsea took an early 14-10 lead off near perfect shooting from Aaron Washington and David Simpson to open the first quarter. Albertville was lighting up the scoreboard early as well, and a Sam Renfroe three followed by a free throw from Avery Nevels brought the first quarter to a close with the Hornets leading 20-19.

This night was only just beginning, with both teams playing incredibly efficient offense throughout. Despite the offensive output from both teams, this game was also marked by stingy, pressure defense, where every shot was contested and every rebound was a battle. Midway through the second quarter, Darrell Foster, Chelsea’s starting center and resident junkyard dog on the boards, aggravated a pre-existing ankle injury and would play sparingly the rest of the way.

With Foster compromised, the Aggies began to work the ball into the lane where Chelsea’s defense would collapse which created a number of open looks for Albertville from the outside, which they hit with a deadly degree of accuracy. Trailing 34-36, Washington pulled up for a contested 28-footer which found the bottom of the net at the buzzer to give the Hornets a one-point advantage going into the half.

Chelsea would open up the lead slightly in the third quarter behind big efforts from Simpson and Joseph Lanzi, but a momentum-shifting basket from Ryan Brown at the end of the third would bring Albertville right back within striking distance, and Chelsea went into the fourth up 54-51.

With Foster sidelined for the most part, the Hornets used a smaller lineup in the fourth, which seemed to be working as they opened up a 60-52 lead and seemed to be in control in front of the raucous home crowd. The Aggies would not be turned away easily, and a couple of big baskets by Renfroe and Brown brought them back within two at 62-60. When Foster was out, Brown would go to work in the post, trying to draw fouls and get easy lay-ins. Chelsea used Washington and Matthew Marquet on offense to slash to the hole and match the Aggies scoring output.

With the Aggies trailing by three, freshman Dillon Harding hit a deep triple to pull the score even at 66 apiece. On the ensuing possession, Foster checked in and was fouled with .8 seconds left in regulation. He hit both free throws to give the Hornets a 68-66 lead.

“That’s the third time this year he’s hit free throws with under two seconds (to go) to either tie it or give us the lead,” an excited yet exhausted Chelsea head coach Nicholas Baumbaugh said after the game. “The third time. I had no doubt they were going in when he stepped to the line.”

The Aggies had one, last-ditch effort to go the length of the floor in less than a second, and when Brown put up a floater that found the bottom of the net, the air went out of the home gym, and the teams were headed for overtime.

“That’s the Chelsea way,” Baumbaugh said with a wry smile when reminiscing on that moment. “I just thought, ‘that’s what happens with Chelsea.’ That’s the demon we’ve been fighting for a long time here at Chelsea is that, it seems like the other team always hits the big shot.”

On this night, the Hornets were able to overcome that demon, as 6 straight Washington points and some big free throws from both Simpson and Foster in overtime sealed the win for Chelsea on a night to remember.

The Hornets, who have played 12 ranked teams this year, are a battle-tested group of gamers who have fought through a tough schedule to reach the 6A Sweet Sixteen, and celebrated the victory with the throng of family, friends and fans that flooded the court after the win.

“The area hadn’t been won since 1986,” Baumbaugh said. “I’ve stressed that to our kids since last May that this could be something special. After we won on Friday it was special, and then on Monday I came in and said, ‘special’s over, let’s go do something extra special’ and we’ve done that.”

Chelsea will take on Woodlawn on Friday, Feb. 13 at 1:30 at Jacksonville State for a shot at the 6A Elite Eight.

Josh Madden (3) of Talladega goes up for a dunk in the first quarter against Helena. Talladega defeated Helena 95-62... read more