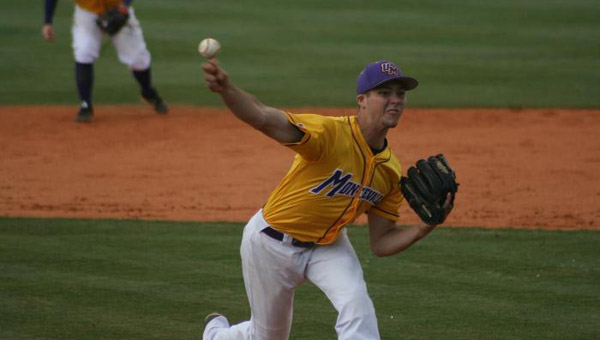 The Montevallo baseball team defeated the University of West Georiga on Feb. 7 during the season-opening three-game series with the Wolves. (Contributed)

CARROLLTON – University of Montevallo sophomore Jacob Whiting provided a go-ahead two-run single in the top of the seventh inning to lead the Falcons to a 7-2 win during the Falcons season-opening series with the University of West Georgia. The Falcons would drop the overall series to the Wolves two game to one.

Whiting finished 3-for-5 at the plate and drove in three runs for the Falcons, who improved to 1-1 on the season. Whiting also scored one run.

Junior Taylor Burr (1-0) picked up the win in relief after pitching 1 1/3 hitless innings with one strikeout and one walk. Junior Aron McRee closed out the game with two scoreless innings while allowing two hits and striking out two batters as he recorded his first save of the season.

Junior Landon Smith, a transfer from Snead State Community College, didn’t allow a hit through four innings in his first start with the Falcons. Smith exited with a no-decision after allowing two earned runs on just hit with three strikeouts and two walks in 5 2/3 innings on the mound.

The Wolves plated a run in the bottom of the first inning before the Falcons tied the game with a run in the top half of the second. Dupree, who led off with a double, scored on a RBI single by Whiting.

Both teams added a run in the fifth inning, with Knudson reaching base after being hit by a pitch and scoring when Willoughby was hit by a pitch with the bases loaded in the top half of the inning.

Whiting plated Rodriguez and Dupree with his two-run single in the top of the seventh inning to break the game open and give the Falcons a 4-2 lead.