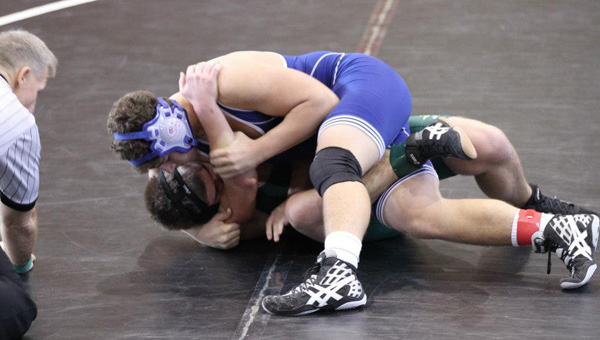 A Chelsea wrestlers tries to perform a pin during competition. (Contributed)

MONTGOMERY- On Feb. 6 and 7, the AHSAA Super South Section indoor wrestling tournament took place in Montgomery. Helena, Shelby County, Calera, Pelham and Chelsea all competed in either the 1A-5A or 6A divisions of competition during the tournament.

In the 1A-5A tournament, Helena was the area highlight coming in ninth out of 25 teams. Shelby County and Calera finished 17th and 18th respectively. Furman Taylor was the lone Husky to come away with a first-place finish, which he did in the 145-pound weight class. Cade Scott in the 182-pound class finished second while Alex Miller, 106-pound class and Hunter Gruhn, 126-pound class both finished fourth to lead Helena.

For Shelby County, Denver Wages came home with a fifth-place finish in the 220-pound class while Walker Wages came in sixth in the 285-pound class to highlight the scoring performances for the Wildcats on the tournament.

Noah Seiger was the top-scorer for Calera, notching a second-place finish in the 126-pound class, beating Gruhn before falling to Collin Jones of Tallassee in the first-place match.

Pelham had a strong showing in the 6A division, finishing fourth out of the 18-team field. Chelsea also fared well, coming in ninth.

Emilio Elliott was the lone winner for Pelham, bringing home first in the 145-pound class. Hasaan Hawthorne, Ian Schlosser and Karl Nagel all finished second in the 160-pound, 170-pound and 195-pound classes, respectively. Giovanni Adan rounded out the top-three finishes for the Panthers, as he came in third in the 182-pound division.

Chelsea saw one top-three finish on the weekend by way of Aaron Ledbetter in the 120-pound class; Ledbetter came in third. Nick Thrasher, 145-pound class and Joseph Wipperman, 152-pound class, both finished fourth in their respective classes.

The 2015 AHSAA wrestling championships will be held from Feb. 12-14 in Huntsville.