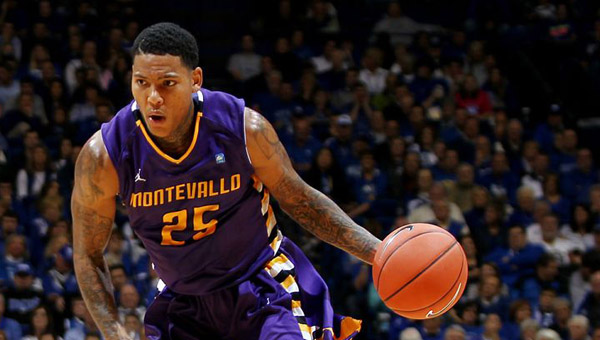 DAHLONEGA – The University of Montevallo men’s basketball team had their seven-game win streak snapped on Saturday, Feb. 7, falling to the University of North Georgia, 93-86. Despite the loss, Montevallo remains on top of the Peach Belt Conference, tied for the lead with Columbus State.

There was a milestone to celebrate for Montevallo, as senior Troran Brown surpassed 1,500 career points. Brown finished with 18 points in the game. He now has 1,516 points in his career.

Saturday’s game saw the Falcons trailing at the half, despite holding the lead for the majority of the opening frame. North Georgia was on top of UM by one point at the break, 34-33.

Brown had a game-high 12 points at the break, shooting 50% from the floor.

In the second half, senior Larry Slaughter scored the first nine points for the Falcons. Following Slaughter’s nine straight points, Ryan May hit a three-pointer that would put the Falcons on top, 45-44.

The teams would trade the lead a few more times, but UNG would claim the lead for good with 13:41 left.

May would end up as the game’s leading scorer, scoring a season’s best 23 points. The senior shot 70% from the field and made 75% of his shots from deep. His six made three-pointers were also a season-high.

In addition to his 18 points, Brown finished with a team-high six assists.

Junior Malik Fields was just behind Slaughter, scoring 14 points in the post and tying Slaughter with a team-high seven rebounds.

It was only the second conference loss in 14 games for the Falcons, who hold a 12-2 record in PBC play.