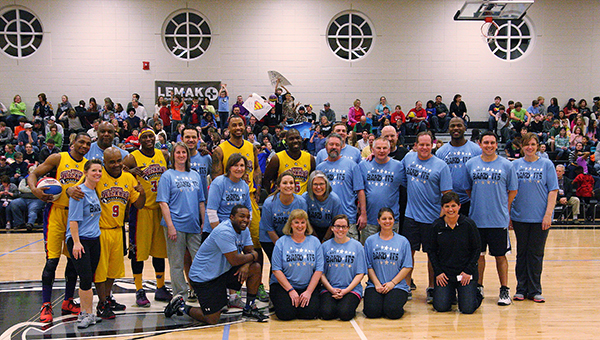 The Helena Band-Its hosted the Harlem Wizards on Tuesday, Feb. 10 and wowed the audience with proceeds going towards the HHS Band. (Eric Starling/For the Reporter)

HELENA–With the high school basketball season winding down, Helena High School’s Band-Its packed out the gym on Tuesday, Feb. 10 for their only game of the season. A rematch with the Harlem Wizards provided a night of fun and entertainment for all involved and at the end of the night, the big winners were the Helena High School Band Boosters.

The Wizards have been wowing audiences with their high flying hi-jinks for over 50 years, creating smiles and laughter for all ages while helping schools and non-profits raise much needed funds.

“This is our second year, and we love that it provides something for the entire community,” stated Band Booster President Jan Hull. “All the proceeds from the over 600 tickets sold will be used to upgrade instruments and to pay for the new uniforms.”

The Band-Its made it interesting and fun for the crowd as well with Lewis “L-Train” Brooks hitting several 3-pointers in the game and a big dunk from Branden “Big Daddy” Vincent.

However, the biggest gasps in the second half came when the Band-Its Leigh “Leighbron” Hulsey pulled down Eric “Broadway” Jones’ shorts revealing his SpongeBob boxers.

In the end, the score didn’t matter. Everyone that attended were winners on this night as they left with smiles on their faces after spending time with family supporting their community and raising funds while doing so.

The Hoover BOE set qualifications and a minimum salary for the Hoover City Schools superintendent job posting during a Feb.... read more