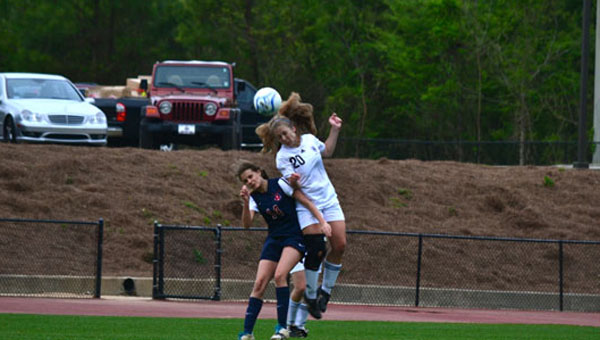 The Briarwood Christian Lady Lions soccer program will look to build on its storied past in 2015. (Contributed / Katie Lee)

BRIARWOOD- The Lady Lions of Briarwood are not strangers to success on the soccer pitch. In the last nine seasons, the team has won the 5A state title three times, and has consistently been one of the premier programs in the state.

Ryan Leib, head coach of Briarwood since 2006, will once again man the helm as the Lady Lions move into 2015. Leib, a former professional soccer player and current Director of Coaching for Briarwood soccer, ended up at Briarwood after his playing days were done.

“I met my future wife, Abby, while I was playing in Charlotte,” Leib said. “My time in Charlotte was my most impactful. They (the team) used soccer as a ministry to reach out to players and coaches. It was very impactful for me.” After Leib met his future wife, her parents moved to Birmingham. When he would go to visit his in-laws, he was introduced to the Briarwood soccer community.

“I kind of knew I wanted to coach while I was still playing,” Leib said. “I knew for a year or two before I was done that I was coming (to Briarwood).”

Since his arrival, there have been a number of incredibly talented players pass through the program, perhaps none more so than Claudia Day who graduated last year and now plays midfield for Wake Forest, where she started all but four games as a freshman. “She was the best player in the state last year and just a great kid,” Leib said.

Replacing players like Day is one of the most enjoyable parts of coaching for Lieb.

“We’ve been fortunate to have great players and great success,” said Leib. “We’ve got a lot of younger players this year who are a year older, a year stronger and a year wiser. One of the joys of coaching is seeing who will step up and fill a role.”

Moving into the new season, the Lady Lions will look to once again compete for a state championship and will do so on the backs of its pool of young talent.

Briarwood opens season play on Feb. 11 at Mountain Brook, and will host Spain Park for the season opener on Feb. 17.

The Vincent Yellow Jackets beat the Asbury Rams in their 2A Sub Regional tournament game on Feb. 10 to advance... read more