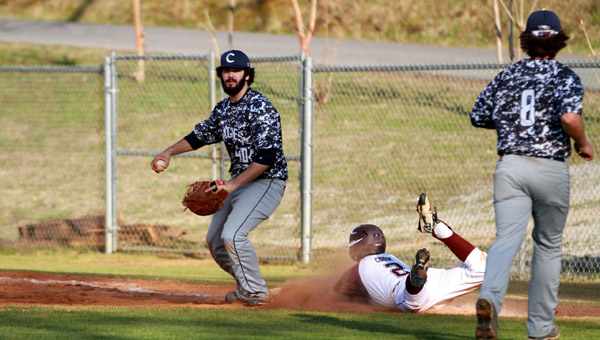 Calera’s baseball season will kick off on Feb. 16 against Montevallo. (File)

CALERA- As the days begin to get a little longer and the weather gets incrementally nicer, the familiar sound of aluminum bats hitting balls and gloves being punched means baseball is around the corner. For the Calera Eagles and head coach Seth Gandy, the promise of spring brings about the familiar preseason hopes of what might lie ahead.

Gandy is in his third year as head coach of Calera, and is ready to see what his young team can do this year.

“We graduated seven seniors from last year,” Gandy said. “We’re a young team. But this is not a rebuilding year. We have a lot of ninth graders who are full of potential and 10th graders who got varsity experience last year.”

The Eagles will look to Matthew Marfice and Dillon Reddin to lead the team. Marfice is a junior pitcher/catcher who is a consistent and steady bat in the Calera lineup. Reddin is a senior first baseman and pitcher who brings some power to the lineup. “He’s a power hitter for sure,” said Gandy.

Calera, a 5A school, missed the state tournament last year but will look to change that going into 2015.

“Our expectation is to make it to the playoffs,” said Gandy.

The Eagles will open their season on Feb. 16 at Montevallo.

The Briarwood Christian Lady Lions soccer program will look to build on its storied past in 2015. (Contributed / Katie... read more