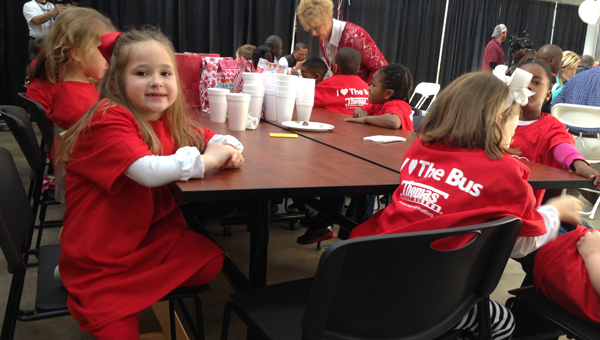 PELHAM—For Stephanie Conwell, a bus driver for schools in Montevallo, the best part of driving a bus for almost 35 years is taking care of the children she meets every day.

“You got to take care of the children, that’s the main thing,” said Conwell.

Conwell was one of more than one hundred people who gathered at Transportation South, Inc., Alabama’s largest school bus provider, to honor Alabama’s best school bus drivers in the fifth annual “Love the Bus” celebration.

“It’s a wonderful event to recognize drivers across the state for a job well done,” said Kevin Snowden, transportation program coordinator for the state department of education.

Bucky Law, president of Transportation South, said the event is a chance for the company to show their appreciation for the bus drivers.

“This is a way for us to recognize and give back to those heroes who take our kids to and from school everyday,” Law said, noting that drivers from 33 counties across the state attended the celebration.

A group of kindergarteners from Alabaster City Schools also attended the “Love the Bus” celebration, in order to represent some of the students the bus drivers serve daily.

“Riding the school bus is part of their everyday life,” said kindergarten teacher Michelle Coburn. “It’s a big deal for them, and they love their bus driver.”

“She drives us safely,” Kelley said. “She takes care of the people on the bus.”

School systems from around the state each nominated one or more candidates to be considered for the Driver of the Year award, with letters discussing the nominees love for his or her job, school and students.

Jim Bell, a bus driver for schools in Trussville, said the responsibility of caring for the kids is the most important part of the job.

“It’s a feeling you get when the parents of the children relinquish their responsibility to you and trust you to take care of their child,” Bell said.

The Hoover BOE set qualifications and a minimum salary for the Hoover City Schools superintendent job posting during a Feb.... read more