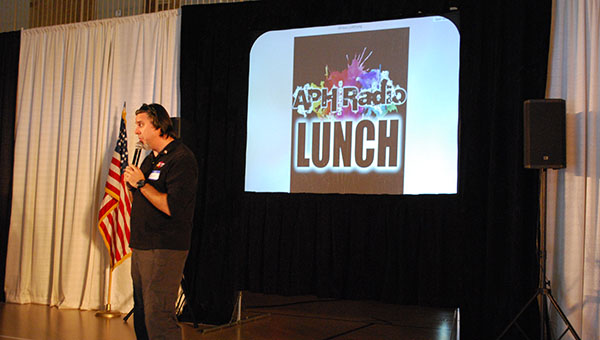 HELENA–After hitting the airwaves in August 2014, APH Radio continues to grow and be a vital source for information and sponsorship throughout Shelby County.

APH Radio General Manager Gene Rowley and other APH correspondents hosted a luncheon on Thursday, Feb. 12, at the Helena Sports Complex, where they thanked their sponsors, discussed how far they’ve come since August and the vision they have for 2015.

“Our goal the last two years was to work so hard to make APH Radio possible,” said Rowley. “We couldn’t do it without our sponsors and our partners and listeners.”

APH Radio is a non-profit radio station and gives out its net profits back to the communities through charitable donations. Their hard work to get the radio station where it is today did not go unnoticed.

A video was shown during the lunch describing the business model and why APH believes it’s important to keep Shelby County dollars within the county.

APH takes pride in covering various high school sports, and this past football season they broadcast more than 40 live games they plan to cover baseball and softball games this spring.

APH Radio can be heard locally on 99.9 FM. For more information visit the station’s website at Aphradio.org.

Learn about herbs with Harpersville UMC