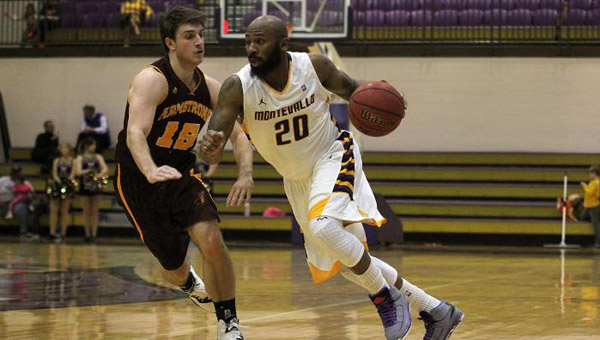 COLUMBUS– On Feb. 11, the two top men’s basketball teams in the Peach Belt Conference met at the Lumpkin Center with identical 12-2 conference records. The winner of the game would stand alone atop the Peach Belt Conference. Behind a game-high 26 points from last year’s PBC Player of the Year Troran Brown, Montevallo defeated Columbus State, 77-70.

In the first half, the Falcons played exceptional basketball on their way to a 47-38 halftime lead.

UM shot above 50% from the floor, 50% from three-point territory, and converted more than 70% of their free throws in the opening frame.

Seniors Brown and Shykeem Jackson had 13 straight points for Montevallo, including the first 10 points on the 12-2 run.

As time expired in the first half, junior Bryant Orange sank a three-pointer while the LED lights were illuminated on the backboard. The Chicago native scored eight points in the first half; he also led the team with three assists and was second in rebounds, collecting four boards.

After the half, Brown scored the first 12 points for the Falcons, keeping his team in the game as the Cougars mounted their comeback.

Brown and Orange would carry Montevallo down the home stretch, scoring 26 of the 30 Falcon points in the second half, suppressing every CSU threat and leading the Falcons to victory.

In all, Orange scored 20 points and grabbed 12 rebounds, a team-high. He also made 100% of his free throws, all of which came in the final 44 seconds of the game. He scored 8 of the final 11 points for the Falcons.

Brown finished with 26 points, a game-high. He shot 50% from the floor and 50% from beyond the arc. He also grabbed six rebounds.

With the victory, Montevallo (17-8, 13-2) is in sole possession of first place in the Peach Belt Conference.

The Montevallo baseball team defeated the University of West Georiga on Feb. 7 during the season-opening three-game series with the... read more