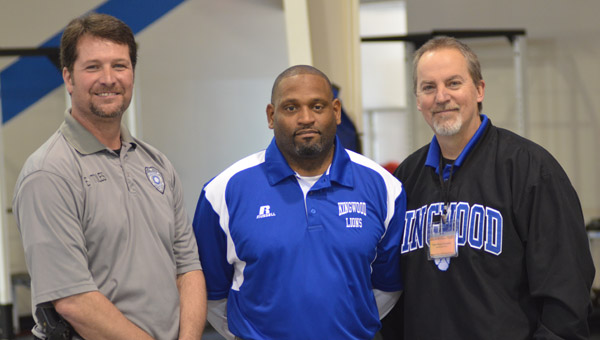 ALABASTER- On the morning of Feb. 12, Kingwood Christian School in Alabaster introduced Sheldon Ward as the new head football coach of the Lions. Ward, who spent last season at Pike County High School in Georgia as a defensive backs coach, has previously been the head football coach at Lyman Ward Military Academy in Camp Hill, and Riverside Military Academy in Gainesville, Ga.

The hire of Ward marks the culmination of a three-month process to replace former head coach Steve Birmingham, who stepped down in November to devote more time to his building contract business. In a press release from the school, KCS Education Pastor Benny Cunningham stated, “Ward comes to us highly recommended by the Alabama Independent School Association.”

Ward was chosen from a pool of over 30 applicants, and has felt for a while that Kingwood would be a great fit.

“In the past I always thought this was a good place to be,” Ward said. “Back in 2010 we played against them (Kingwood) when I was at Lyman Ward. I liked the way the kids were, how they carried themselves, just very positive. That’s the environment I want to be around.”

Ward, who played college football for Jacksonville State and spent some time in the professional arena football league circuit, has one daughter and cited the Christian environment of the school as having a significant impact on his decision to take the job.

“It (the environment) helped a lot,” said Ward. “This is the kind of environment I want my daughter to be in.”

The Lions ended with a 4-6 record last season, and Ward will look to bring his own philosophy to the field next season.

“We’re going to play (an) aggressive, hard-nosed and disciplined (style),” Ward said. “I want to put up a very competitive program. Whether we win or lose, I want our opponent to know, ‘we played Kingwood last night.’ I want to bring that physical aspect into it, a competitive aspect that will hopefully turn into a lot of W’s.”