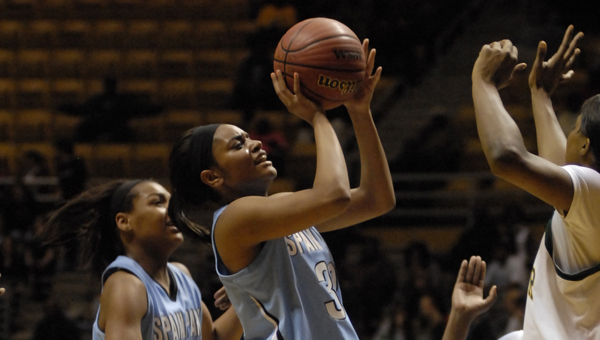 Spain Park’s impressive season came to an end on Feb. 12 to Gadsden City. The Lady Jaguars ended with a 25-9 record. (File)

JACKSONVILLE- In a Feb. 12 9 a.m. 7A Sweet Sixteen matchup between the Spain Park Lady Jaguars and the Gadsden City Lady Tigers, Spain Park was turned away with a 64-51 loss. The Lady Titans only saw six players break into the scoring column, four of which scored in double-figures. They were led by an 18-point effort from Takara Blount, who was accurate all morning on her way to 7 of 13 shooting from the floor.

The Lady Jaguars relied on big efforts from the likes of Victoria Baldwin, Claire Holt and Skyla Knight to keep them close in the contest. Baldwin finished with a game-high 22 points to go along with eight rebounds to lead Spain Park. Holt finished 10 points and Knight finished with eight.

Spain Park was able to open an early 6-2 lead, but Gadsden City went on a quick 6-0 run in the middle of the first, and the Lady Jaguars never led in the contest again. They would get close a number of times, and cut the score to 21-22 midway through the second quarter, and tied the game at 40-40 toward the end of the third, but the Lady Titans always were able to keep their noses out in front.

With the score still close at 45-40 in favor of Gadsden City going into the last quarter of play, the Lady Titans scored 19 points to ice the contest, and would advance by a final of 64-51.

Elizabeth Philpot and Keyasha Gordon both contributed five points and six rebounds in the losing effort.

Spain Park ended their impressive season with a 25-9 record, and won the 7A Area 6 tournament championship for the third consecutive year to earn them a bid to the 7A Sweet Sixteen.