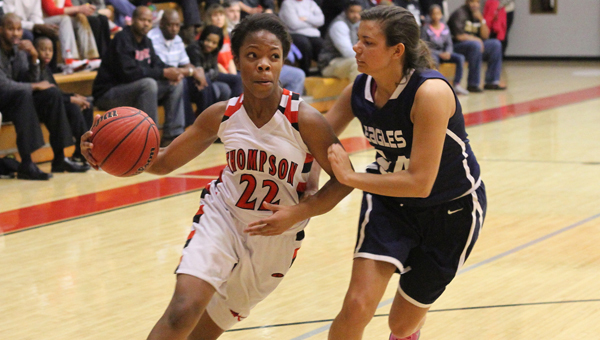 Indiah Cohill and the Thompson Lady Warriors dropped a hearbreaker to Hazel Green on Feb. 12 during the 7A playoffs. (File)

HANCEVILLE- The Thompson Lady Warriors lost in the 7A Sweet Sixteen on Feb. 12 to the Lady Trojans of Hazel Green on a heartbreaking, buzzer-beating three to give Hazel Green a 36-33 win.

Thompson came into the game hoping to make a deep postseason run, and wanted to be in a position to win the game, which they were. However Hazel Green was able to make one more play when it mattered most.

In the low-scoring contest, points were at a premium. Kelsea Bivens, who contributed eight points and nine rebounds, and Janese Richardson and Jordan Lenoir, who both poured in six points, led Thompson. Rayven Pearson led all scorers on the day with 12 for Hazel Green.

The game was low-scoring but tight all the way through, with the Lady Warriors trailing at the end of the first quarter by a score of 12-9. The second quarter saw the most concentrated scoring for Thompson, as Bivens and Lenoir led the Lady Warriors to a 25-19 halftime lead.

In the last quarter of play, neither team scored for the first four-and-a-half minutes before Hazel Green began to mount its comeback. With the score tied at 33 apiece in the waning seconds of the game, Maia Hill put up a three-point shot from the top of the key that found the net for her only points on the day with less than five seconds on the clock to knock Thompson out of the 7A tournament.

Thompson finished the season as the 7A Area 5 runner-up.

Thompson edges out Oak Mountain by less than a point, wins AHSAA 7A South Super Section

Dominic Latona (left) helped lead the Thompson Warriors to a razor-thin victory in the 7A AHSAA South Super Section over... read more