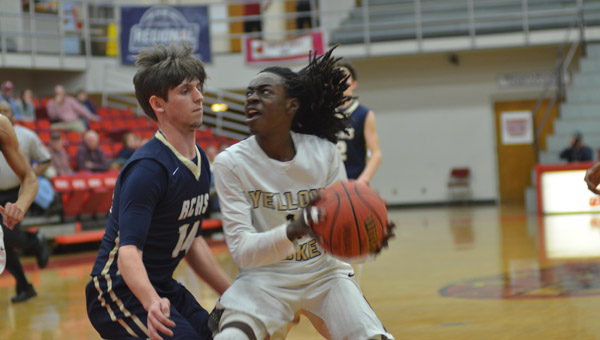 JACKSONVILLE – The Vincent Yellow Jackets made the Feb. 12 2A Sweet Sixteen showdown with Randolph County a very uninteresting affair on their way to an easy 65-32 win. The Yellow Jackets asserted themselves as the superior team right from the opening tip on their way to a 9-0 early lead. The issue for the Tigers on this night was a complete lack of presence on the boards. Vincent was able to clean up every defensive rebound, and was able to continue offensive possessions by getting offensive rebounds at will.

Randolph County was only able to manage one field goal and a pair of free throws in the first quarter, as JaCorey Roper and Wesley King led the Yellow Jackets to a 20-4 first quarter lead. The Tigers would never truly threaten Vincent the rest of the way due to Vincent’s dominance on the glass and ability to disrupt the Randolph County offense. Vincent used a full court trapping press defense for most of the first half and caused a number of easy buckets. The Yellow Jacket backcourt combination of Najar Williams, Jace Greene and Vec Hamilton were able to get to the rim seemingly at will and were finishing tough shots in the paint. Vincent led at the half 34-12.

The second half saw the Yellow Jacket starters play about half of the third quarter before Vincent head coach John Hadder pulled his first-string and turned the game over to his subs. Most of the fourth quarter was played with the second platoons from the Yellow Jackets.

Roper led the way for Vincent with 20 points on the night, while Braxton Mackey was the leading scorer for Randolph County with nine.

Vincent will move on to the 2A Elite Eight where they will face Fyffe for a chance at the 2A Final Four.

The Vincent Yellow Jackets beat the Asbury Rams in their 2A Sub Regional tournament game on Feb. 10 to advance... read more