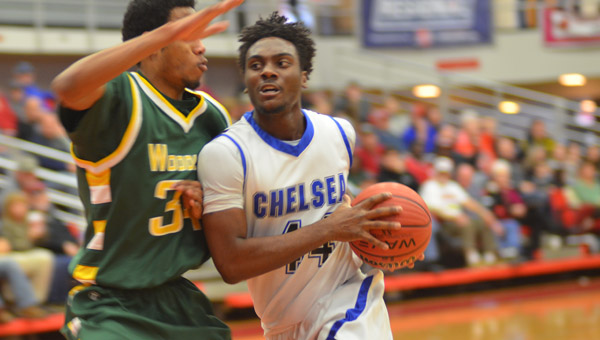 Darrell Foster of Chelsea drives the lane during their 6A Sweet Sixteen loss to Woodlawn on Feb. 13. (Reporter Photo / Baker Ellis)

JACKSONVILLE – The Chelsea Hornets ended their postseason run on Feb. 13 to the Woodlawn Colonels at Jacksonville State by a score of 58-66. Chelsea, fresh off a dramatic overtime victory against Albertville, came out of the gate shooting well on their way to an 8-2 early lead. From this point, Woodlawn settled into the game and began to assert themselves in the paint with their superior size.

Chelsea’s Darrell Foster was the only real deterrent to the Colonels efforts in the paint early on, as he cleaned up the defensive glass and was able to score a couple of buckets on second-chance points. With Woodlawn ahead 15-10 midway through the first quarter, Chelsea went on a 10-5 run to end the first quarter tied 20-20.

Throughout the remainder of the game, Woodlawn was able to cause a number of problems with their 1-2-2 full court trapping defense that the Hornets could never truly break with any degree of consistency. When the press was broken, Woodlawn would use a combination of a 1-3-1 and a 3-2 half court zone that was designed to trap the Hornet ball handlers on the perimeter of the defense. DeJuan McGrue scored six straight points for the Colonels late in the second and Chelsea went into the half trailing 33-40.

The second half was more of the same for the Hornets, as they were never really able to settle in to their offense. Every time the Hornets would try to make a run to cut into the Woodlawn lead, two or three costly turnovers would kill any momentum Chelsea was building. On defense, the Hornets also had a difficult time stopping Javien Williams, who was able to get to the rim seemingly at will for much of the afternoon on his way to a game-high 26 points.

Late in the fourth quarter, with the Hornets down 58-64, the Chelsea seniors received a standing ovation from the crowd for their performance on the year. The Hornets finished the season at 16-16.