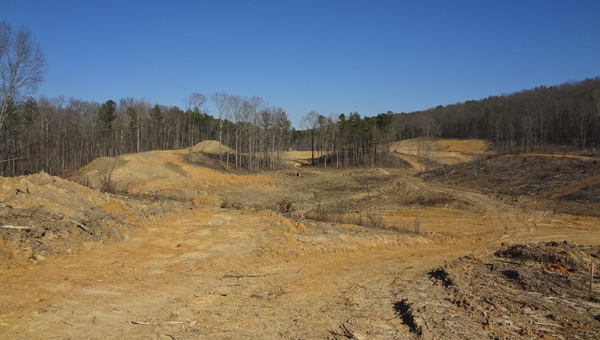 More than 100 acres of land off Shelby County 11 in Chelsea will be home to the future Chelsea Sports Complex, which is expected to be completed in the next few years. (Reporter Photo / Emily Sparacino)

CHELSEA – The future site of the Chelsea Sports Complex off Shelby County 11 is taking shape as crews work to have a portion of it finished by the fall.

The complex, which will sit on roughly 106 acres of the city’s land near Chelsea High School off Shelby County 11, will include six competitive tennis courts, eight baseball fields, a football field, a soccer field and a 5-acre lake, Chelsea Mayor Earl Niven said.

“We hope to have three baseball fields by the fall for the youth,” Niven said. “This is an ongoing project. We may go four, five or six years before everything is in place.”

The project started in the spring of 2014 and is estimated to cost between $7 million and $8 million when finished, Niven said.

Funding for the project is coming through capital projects, he added. The city borrowed $6 million to take care of the nearly complete Chelsea Community Center off Shelby County 47 and the sports complex, along with adding a 1-cent sales tax for capital projects afterward.

The lake will be about 18 feet deep with a dam that will probably be 40 feet on top, with two lanes and guardrails on each side, Niven said.

“Our school has a fishing team,” Niven said. “This would be a place where they could practice fishing.”

The fields will be open mainly for ball practice for youth activities, but there will be designated times families may use the park, Niven said.

“We have about 450 baseball players,” he said. “There are a lot of kids in the Chelsea community. Here we’re offering all the major sports, and it gives them the opportunity to play all the sports that are available.”

Future plans for the complex include walking trails, a playground, a picnic area and an outdoor amphitheater, Niven said.

The site is currently being graded, and the next phase will consist of bringing in topsoil, irrigating, laying sod and installing fencing for the fields.

“It will bring people to the community,” he said of the complex.

Darrell Foster of Chelsea drives the lane during their 6A Sweet Sixteen loss to Woodlawn on Feb. 13. (Reporter Photo... read more