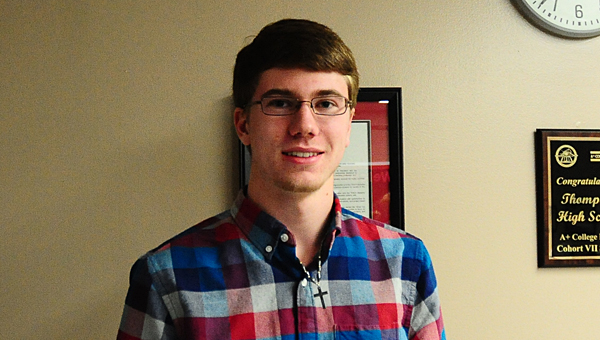 ALABASTER – Thompson High School senior Warren Snell was quick to set the record straight when asked about his studying habits.

“People always think that (I study all the time),” Snell said with a laugh during a Feb. 13 interview at the high school. “I’ve never had to study a whole lot, except when my parents make me.

“I love history because I like learning about the events that led up to whatever mess we’re in currently. I don’t really study math, I more just practice it,” Snell added. “I like science because I like to know why things are the way they are.”

A few months ago, Snell’s math teacher alerted the high school senior he had been included on the National Merit Scholarship semi-finalist list, which recognizes the top students in the nation and makes them eligible to receive scholarships.

When Snell, who is heavily involved in the school’s theater and Junior ROTC programs and with the Community Baptist Church and Church at Shelby Crossings youth groups, discovered he had been named one of the 16,000 semifinalists in the nation, it was only two days before the deadline for students to apply for the finalist list.

After Snell, who is planning to attend the University of Alabama after graduation, worked with the THS faculty to send in his finalist application on time, the National Merit Scholarship Corporation notified him on Feb. 11 he had moved on to the next level.

From the finalist list, the National Merit Scholarship Corporation will choose scholarship winners, who will be eligible for more than $33 million in scholarships.

“I was elated when I saw I was a finalist,” Snell said, noting many colleges award scholarships to students who make the semifinalist and finalist list. “It’s going to really help me to get through college for free.”

CHHS band members play at the next level