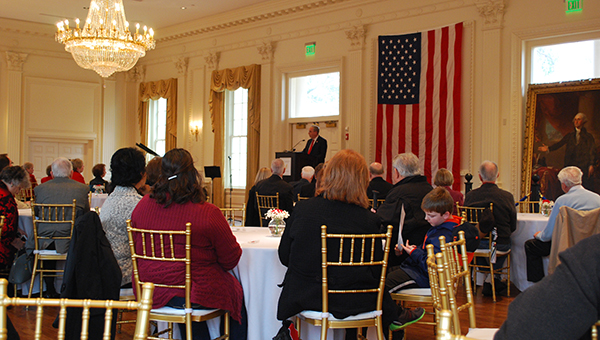 MONTEVALLO–Threats of possible winter weather on Monday, Feb. 16, never happened and the American Village was still able to hold a celebration honoring George Washington’s birthday, as well as acknowledging the 15th anniversary of the venues existence.

The celebration took place on Presidents Day, a fitting day to honor the first U.S. president in history.

The day started off with a special convocation held in Liberty Hall where numerous special presentations and dedications were performed.

One of those presentations included a copy of the Lansdowne portrait of George Washington by Gilbert Stuart.

Graham Boettcher, chief curator, and William Cary Hulsey, curator of American art at the Birmingham Museum of Art, presented the famous portrait and described some of the things that make it special.

“I can’t think of any better place for this portrait to be and where this portrait can really serve the mission of this organization,” said Boettcher. “This portrait shows George Washington at the age of 64 renouncing a third term as president. This is a tradition that continued till depression and ultimately the second World War necessitated that tradition be broken. The portrait is absolutely loaded with symbolism. My favorite symbol is the rainbow in the upper right and that is the symbol of peace and prosperity that America enjoyed after the Treaty of Paris was signed in 1783.”

After the convocation, birthday cake was enjoyed and happy birthday was sung to celebrate Washington’s 283rd birthday.

The Shelby County School System will delay the start of school by two hours on Feb. 17. (File) By NEAL... read more