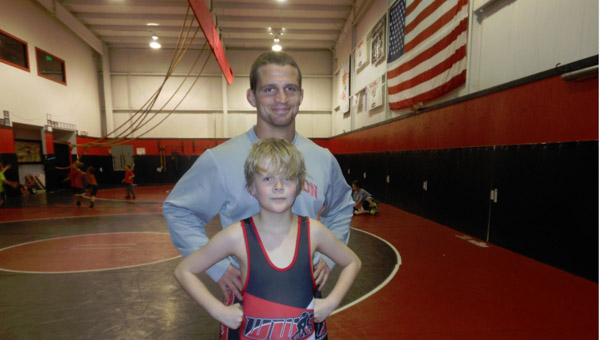 The Warrior Wrestling Club in Alabaster trains young wrestlers from all over Shelby County. (Contributed)

Since the mid-2000’s, the Warrior Wrestling Club in Alabaster has been bringing in young athletes ready to hit the mats. From Pinson to Prattville, to the south side of Birmingham, young wrestlers come to this establishment to hone their skills for the next level. One in particular is 5th grader Taylor Seibert of Pelham who began wrestling in October of this past year. Taylor has just completed his first wrestling season and is already anxious to begin again. So much in fact, he has chosen to do offseason wrestling, which is year round.

Taylor became interested in the sport when one of the coaches from the Warrior Wrestling Club came to his school to speak. Taylor’s mom, Beth, is very supportive of his decision to join an organized sports league. “I definitely like the discipline and confidence it has given him,” she said. “He is getting to know kids and learn the moves and techniques as well.”

The head coach of the Warrior Wrestling Club is Shad Rissler, who has been coaching there for three years. Rissler is an expert on the sport of wrestling as well as an elite athlete. He was once voted a high school and college All-American and even wrestled with team USA in 2008 and in 2010. In college he wrestled at Division II King College in Bristol, Tenn. Rissler and his staff focus on the basics and fundamentals of wrestling while playing games that correspond to wrestling moves to make the task easier and more enjoyable for their young students.

The kids also have opportunities to compete in tournaments regularly. “During youth season we have youth season tournaments,” said Rissler. “Every Saturday they will have a tournament.” One of the tournaments that occurs during the season is a youth national tournament that takes place in Atlanta, Ga. The total number of members who signed up for the year was 52 and their ages ranged from grades K-12.