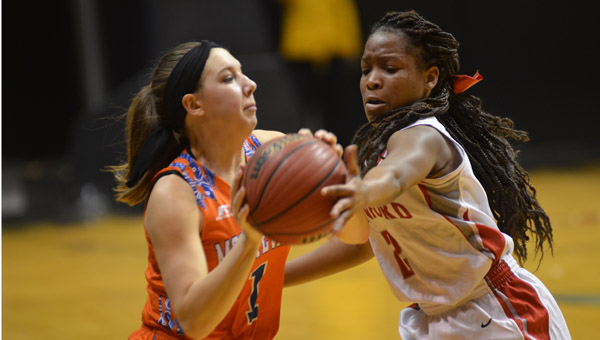 Emri Hannon of Montevallo has her pass denied by Munford’s Kedra Curtis during the Lady Bulldogs 49-53 loss at Alabama State on Feb. 16. (Reporter Photo / Baker Ellis)

MONTGOMERY- The weather outside was dreary and gray, but the action on the floor during the girls 4A Sweet Sixteen game between the Montevallo Lady Bulldogs and the Munford Lady Lions on Feb. 16 was anything but. Montevallo, the 4A Area 7 champion, came into the game fresh off a close victory over Bibb County in the sub regional round of the state tournament while Munford, the 4A Area 8 runners-up, was coming off of a dominating performance over Elmore County to set the stage for the showdown.

From the opening tip, it appeared the Lady Bulldogs would receive little resistance from Munford, and they jumped out to a 10-2 lead behind seven points from freshman Lauryn Lilly and a three from Isabel Gallo. Montevallo was causing all sorts of problems for the Lady Lions with their full court defense, and was able to get easy buckets off of a number of Munford turnovers. Munford only managed one field goal in the first quarter, and after the first eight minutes Montevallo led 22-5.

The second quarter was relatively low-scoring for both teams, but the Lady Lions were able to chip away at the daunting hole they had dug for themselves and went into the half trailing Montevallo 31-17.

In the second half, Montevallo began to unravel. Kierra Grace of Munford made it her mission to break the Lady Bulldogs press on her own, and was able to score transition buckets with an alarming degree of efficiency as Montevallo watched the lead they had built deteriorate before their eyes. The Lady Lions held Montevallo to just seven third quarter points on their way to 19 of their own. The score after three quarters of play was 38-34 in favor of Montevallo.

Munford could smell blood going into the fourth quarter, and continued to attack the rim behind efforts from Grace and Victoria Mitchell. Dakota DuBose scored six straight points for Montevallo to keep them afloat for some of the fourth, but Grace would not be denied. With the score tied at 47 apiece, Grace ripped off six straight points to put the game away for the Lady Lions, and Munford escaped with the come-from-behind victory over Montevallo by a score of 53-49.

Montevallo ended its season as the 4A Area 7 winner.