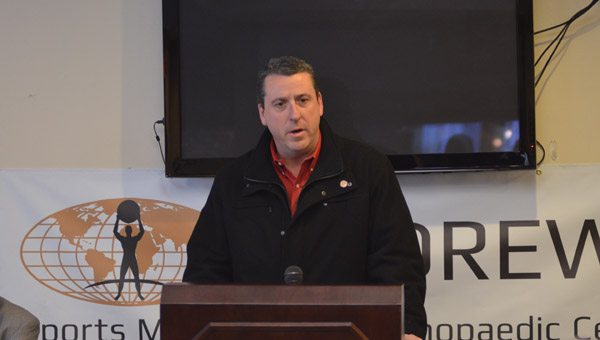 PELHAM- Mike Quenneville supported the players decision from the beginning. The fifth-year head coach of the Alabama Frozen Tide, along with members of the team, announced on Feb. 16 the program will be moving from ACHA Division III to ACHA Division I at the start of the next hockey season.

The ACHA is the American Collegiate Hockey Association, which is the governing entity of non-varsity college hockey. The ACHA is not connected to the NCAA, and thus cannot provide scholarship opportunities for the athletes competing under its jurisdiction.

“This (move) will be still non-scholarship,” Quenneville said. “The decision was actually made by the players, and we were very supportive of that decision.”

The decision to jump up to ACHA Division I was made for a number of reasons, Quenneville said, but cited the exposure that comes with playing better teams and an easier travel schedule as two of the main factors in the players decision to make the transition.

The Frozen Tide, which play all of their home games at the Pelham Civic Complex, will continue to call Pelham home when they make the transition.

Before that transition happens, the Frozen Tide are focused on finishing their last ACHA DIII season on a strong note. With a record of 23-4-2, Alabama secured an at-large berth to the 16-team ACHA Division III National Championships. The tournament will host the best 16 teams from across the country in Division III and will take place in the Pelham Civic Complex from March 10-14.

“The city sent some folks down to the coaches convention to bid for the tournament,” Quenneville said. “They presented Pelham as an option, and what we could offer here and the league chose us (to host).”

In a press release from the Frozen Tide, the partnerships between the city of Pelham and the program itself were cited as playing a significant role in the players’ decision to make the jump to Division I.

Once the National Championship has taken place, the players and coaches will turn their focus toward the new challenges that wait in ACHA Division I.

“We’re excited for them to want to move up to a bigger league,” said Quenneville. “There’s a smaller amount of teams in Division I but, some top-tier players.”

Emri Hannon of Montevallo has her pass denied by Munford’s Kedra Curtis during the Lady Bulldogs 49-53 loss at Alabama... read more