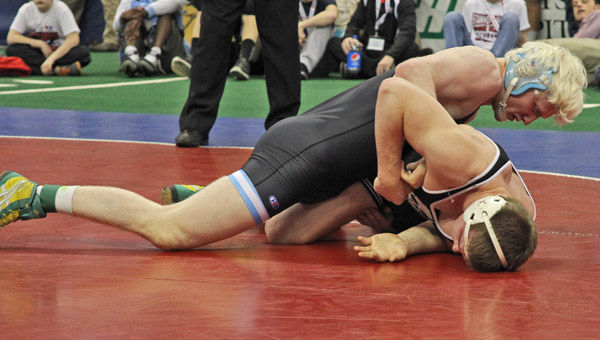 What McClure may have perceived as a setback or a misstep in his athletic career proved to be anything but once he found a home on the wrestling mat. He started wrestling with the Alabama Wrestling Club in Alabaster and quickly realized his skill on the mat. He had significant success at the middle school level as a seventh and eighth grader, and moved into high school at Spain Park hoping for the same success.

While McClure continued to rack up wins in high school, the state title at the high school level continued to elude him. Moving into his senior year, McClure was still without a state championship, but remained optimistic. “I always hoped for the best,” McClure said. “I always wanted to win the next one.”

During his senior campaign McClure amassed an historic 55-3 campaign which moved him into first-place all time for wins in Spain Park history with 194. He qualified for the 7A state meet and won the 220-pound individual state title with a statement win over Bret Winters of Hoover. McClure will leave Spain Park as the winningest wrestler in school history and a state champion as well.

McClure, a fierce competitor and superior athlete on the mat, is reserved and soft-spoken off it. He does not like to gloat about his accomplishments or accolades, and talks about his time as a wrestler with humility.

“Nothing comes easily in wrestling,” McClure said. “You need good teammates and coaches to push you all the time. The time you put into it, the community and work ethic it teaches, it’s great.”

As for his record number of wins, McClure is not overly attached to that accomplishment. “I hope someone comes along and beats that, I’ll cheer for them,” he said.

McClure will attend Auburn University in the fall, where he will not wrestle, and he will pursue a degree in civil engineering.