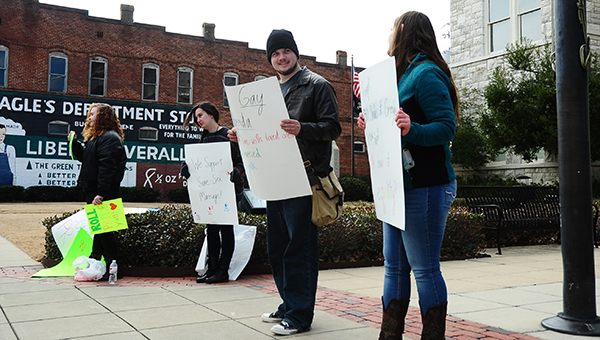 Despite frigid temperatures and chilly winds, a group of four students rallied outside of the courthouse with posters showing their support a little after noon.

The protestors held signs with phrases such as “Forget 50 Shades of Grey, how about all shades of equality.”

A Facebook event was created by Amalia Kortright, president of the secular student alliance, and around 50 students indicated they would attend the rally on the Facebook group.

“I feel like it sets a bad precedent when you can’t promote equal rights to all of our citizens in Shelby County,” said Kortright. “I feel like if we were to issue same-sex marriage licenses, then maybe more of the LGBT community would be more comfortable living here, and that’s just how I feel.”

Mason Shell, a UM freshman studying theatre said there are misconceptions about the same-sex community.

“It just makes me mad because we always make out LGBT people to be the devil or they’re evil, and they’re decent people,” said Shell. “They’re good people, and if they want to get married they should be able to.”

Jenny Doss, a Columbiana citizen and member of Shelby Christian Fellowship, showed up to voice her opinion that as Christians, the protesters should uphold what the Bible says.

“As young people, if there’s any time in this world to grab a hold of God’s word it is right now,” said Doss. “This country is in such dire need for love, and as Christians we are to uphold God’s word.”

Church of Highlands has plans for permanent Alabaster campus

The Church of the Highlands is planning to establish a permanent location in Alabaster. (File) By NEAL WAGNER / Managing... read more