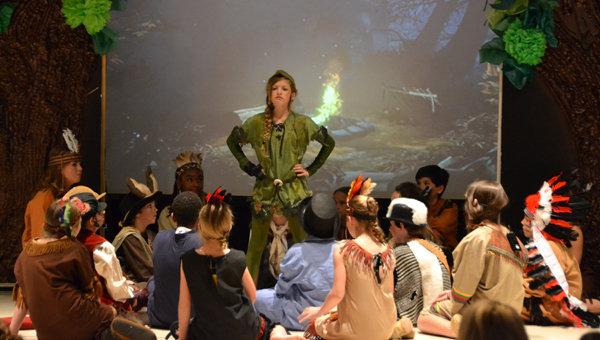 HOOVER—Never Never Land will be coming to Greystone Elementary School as the fifth grade Drama Club presents “Peter Pan” on Feb. 19 and 20.

“It takes a lot of work,” Womack said, explaining the Drama Club students have been preparing for the musical since October.

Students are offered the opportunity to audition for a part in the cast in the beginning of the year.

“All of the fifth graders learn about what it takes to be on stage,” Womack said. “If they want, they can audition.”

Students can also work behind the scenes as assistant directors, the lighting and sound crew or the stage crew.

Preparation for the full-scale musical consisted of a visit to the Birmingham Children’s Theater, where students saw a play and had a question and answer session with the cast, and lots of practice, Womack explained.

“We go through the whole thing maybe 20 times,” Womack said.

The Drama Club will put on three performances of Peter Pan, two for the school community and one evening performance for the parents.

“That’s the big one that we all prepare for,” Womack said of the performance for the parents. “They see all the lights on them and the cameras are out there.”

The musical is an annual fifth grade tradition at GES, and is something the community looks forward to each year, Womack said. Past productions include Aladdin, the Little Mermaid and the Jungle Book.

“The whole school is always excited to see what the play will be and who plays each part,” Womack said. “It’s something the entire school looks forward to.”

The fifth grade cast and crew also enjoy putting on the production, and learn valuable lessons in teamwork throughout the process, Womack said.

“We have some really talented kids,” Womack said. “It really helps their self esteem… every part is important.”