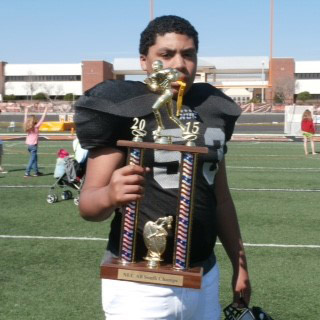 Ryan Caver is only a seventh grader, but he has already begun to garner national attention for his size and performance on the football field. Caver, who attends Calera Middle School, stands at 5 feet, 8 inches and weighs 180 pounds at the young age of 12.

He plays both ways for the Calera Middle School football team as an offensive lineman and a defensive end, and was nominated to participate in the National Underclassmen All-Star Youth game on Feb. 15 in Oviedo, Fla.

Caver’s mother, Yolanda Caver, said there is no way to know who nominated her son for consideration to participate in the game, but said he received an email letting him know he had been invited to play on the West team. The West defeated the East in the contest by a score of 7-0 and was named the 2015 All South Youth Champions.

“There were kids from Virginia, Georgia, Tennessee and some other places on his team,” Caver said. “But I’m pretty certain he was the only one from Alabama.”

This seems to be only the beginning of a bright future for Caver on the football field, as he has already been asked to compete at a combine held by Rivals at Hoover High School in March.

Caver has been playing football since he was 5, and plans to continue playing as long as he can, with the ultimate goal of one day playing in college, his mother said.